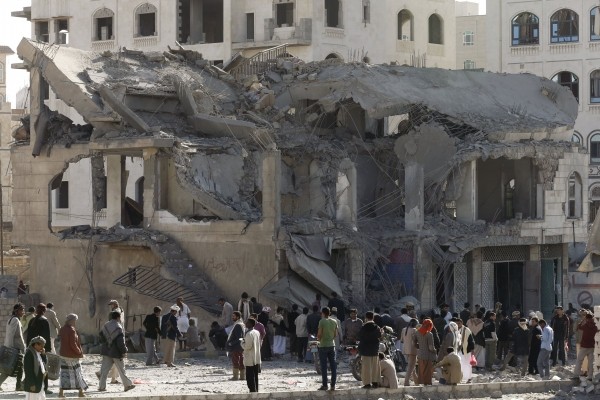 The National View: The UK’s complicity in forgotten, desperate Yemen must be challenged

LIFE in Yemen is a daily battle against poverty, crippled infrastructure, shortages of food, water and medicines – and British-made bombs.

Before the Saudi-led coalition entered the fray in March last year, almost half of the population was already living below the breadline, with two thirds of young people jobless and basic social services hanging by a thread.

Even at that point it was estimated that more than 60 per cent of the population – 16 million people – needed humanitarian aid.

But since the bombing began, things have got unimaginably worse, and all the while the world turns its eyes away.

Earlier this week the Health and Population Office in the Marib province warned of an imminent collapse of the health care system due to the acute shortage of medicines.

Several facilities have been forced to stop treating patients, despite the urgent and ongoing need.

Across the country around 2.5 million people have been displaced and 10 of the 22 provinces were given “emergency” ratings in late 2015 – one step below “famine” as all but a tiny fraction of the country’s food imports have stopped.

To put this in context, before fighting began Yemen imported more than 90 per cent of its food.

Meanwhile, imports of the fuel used to maintain the water supply have been restricted and more than 19 million now cannot access safe, clean drinking water or sanitation.

Against this backdrop, disease is thriving – the World Health Organisation warns of increasing risk of death during childbirth and curable, preventative illnesses are on the rise.

In November a UN report found almost 8,900 verified reports of human rights violations, which breaks down to around 40 per day.

If it sounds desperate, critical, inhospitable, unbearable, inhumane, it is.

And yet the international community looks away, fails to act – a UN attempt to raise £1 billion for aid efforts launched in June had yesterday achieved just 56 per cent of its total.

Yes, £1 billion is a lot of money, David Cameron can tell you that – it is exactly the same sum generated for the UK coffers in arms sales to Saudi Arabia in just three months.

The war in Yemen is big business, but if Cameron’s treatment of the subject in the House of Commons is anything to go by, it is not a major concern. These are not British lives. This is not a British struggle. This is not, as he has repeatedly asserted, a British war.

And yet UK weapons, UK personnel, UK politicians are entrenched in this conflict, whether at factory, operations room or Downing Street level.

Yesterday the Yemen Post newspaper spoke of “blood on UN hands for being silent as 2,000 children” were killed over 10 months.

That silence cannot continue and Cameron’s questionable rhetoric – that aiding the air strikes makes the UK safer – must also be challenged.