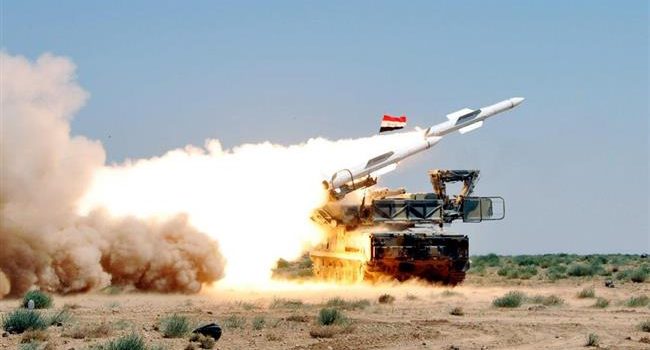 The Syrian army says its air defenses intercepted several missiles fired by Israeli warplanes towards a military position near the capital, Damascus.

In a statement carried by state media on Wednesday, the army said the Israeli aircraft used Lebanese airspace for the missile strikes.

Loud blasts were heard in Damascus at around 3:30 a.m. local time.

“Our air defense systems blocked them and destroyed most of them,” said the statement.

“The general command of the armed forces holds Israel fully responsible for the dangerous consequences for its repeated, aggressive and uncalculated adventures,” it added.

The new Israeli act of aggression was first reported by state media, which said the missiles had been aimed at a scientific research center in Jamraya village.

Over the past few years, Israel has frequently attacked military targets in Syria in what is considered as an attempt to prop up terror outfits that have been suffering heavy defeats against Syrian government forces.

Israel has also been providing weapons to anti-Damascus militants as well as medical treatment to the Takfiri elements wounded in Syria.

The latest attack on Syria came shortly after Israeli Prime Minister Benjamin Netanyahu paid a rare visit to the occupied part of Syria’s Golan Heights and peered across the border.

Netanyahu said the regime was ready for “any scenario and I wouldn’t suggest to anyone that they test us.”

The warning came one week after the Israeli minister of military affairs stressed that a new war with Lebanon would also likely involve Syria.

“Israel’s northern front extends to Syria; it is not just Lebanon. I am not sure that the Syrian government can resist Hezbollah’s attempts to drag them into a war with Israel,” Avigdor Liberman said.

Israel launched two wars on Lebanon in 2000 and 2006, in both cases the Hezbollah resistance movement inflicted heavy losses on the regime’s military.

The regime seized the Golan Heights from Syria after the 1967 Six-Day War and later occupied it in a move that has never been recognized by the international community.

It has built tens of illegal settlements in the area ever since and has used the region to carry out a number of military operations against the Syrian government.