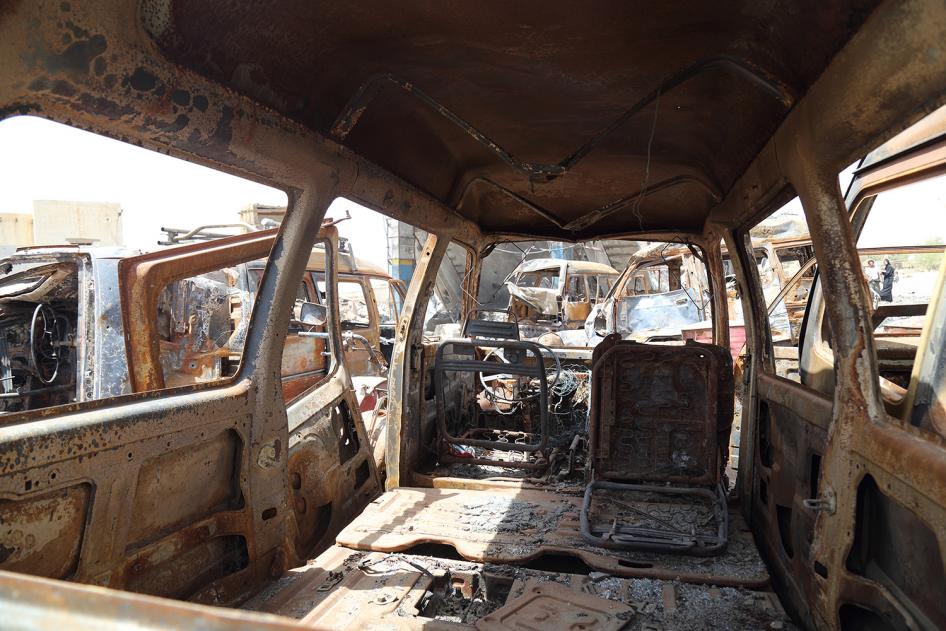 (New York) – Saudi Arabia-led coalition forces have carried out airstrikes killing dozens of civilians in Saada City, in northern Yemen, since April 2015 in apparent violation of the laws of war, Human Rights Watch said in a report released today. The coalition should investigate all alleged laws-of-war violations and provide compensation and other redress to civilian victims as appropriate.

The 47-page report, “Targeting Saada: Unlawful Coalition Airstrikes on Saada in Yemen,” documents a dozen airstrikes on the Houthi stronghold that destroyed or damaged civilian homes, five markets, a school, and a petrol station, though there was no evidence these sites were being used for military purposes. These strikes killed 59 people, reported to have been civilians between April 6 and May 11. At least 35 children were among those killed.

The report draws on on-site investigations and interviews with 28 victims and witnesses that Human Rights Watch conducted in Saada City in May, as well as a review of photographs and video, and analysis of satellite imagery.

The Saudi Arabia-led coalition of nine Arab countries began its aerial campaign in Yemen on March 26 after forces of Ansar Allah – commonly known as Houthis – took control of large swathes of the country, ousted the government of President Abdu Rabbu Mansour Hadi, and moved south to threaten the port city of Aden. On May 8, coalition authorities declared all of Saada City a military target, warning its residents to leave. This declaration violated the laws of war because it fails to distinguish between civilians and legitimate military targets, Human Rights Watch said.

Human Rights Watch investigated six strikes on houses used as residences and an empty school in Saada. In the deadliest incident, on the evening of May 5, coalition aircraft dropped several bombs on a cultural center and an adjacent house, killing 27 members of the al-Ibbi family, including 17 children.

Walid al-Ibbi, 35, the only al-Ibbi family member present to survive the attack unscathed, told Human Rights Watch: “Just earlier that evening, a family had come to our house to ask for my daughter’s hand in marriage for their son. Now I have lost my wife and all four of my daughters. I cannot believe that everyone I love is gone.”

Coalition aircraft also bombed five markets and a petrol station crowded with motorists lined up to fill their vehicles. Not only were these attacks unlawful because of the apparent absence of any military target, but they contributed to civilian hardship in the city, where people are suffering from shortages of food, water, and fuel. The United Nations has warned of a looming humanitarian catastrophe in Yemen.

Under international humanitarian law, or the laws of war, civilians and civilian structures may never be deliberate targets of attack. Attacks that fail to discriminate between civilians and combatants or that cause civilian harm disproportionate to the expected military gain are prohibited. Warring parties are also required to take all feasible measures to minimize civilian harm.

Human Rights Watch wrote to the Saudi Arabian government seeking information on intended targets of 13 airstrikes in Saada, but has received no response.

Satellite imagery shows over 210 distinct impact locations in built-up areas of the city consistent with aerial bombardment. These attacks damaged or destroyed hundreds of buildings. Investigation of the impact sites and remnants from the weapons used shows that coalition aircraft have dropped munitions with blast and fragmentation effects that can cause injuries and damage over a wide area.

Coalition forces should abide by the laws of war in its military operations, Human Rights Watch said. The coalition should not use explosive weapons with wide-area effect in populated areas because of the inevitable harm they cause to civilians.

The United States is not a member of the Saudi Arabia-led coalition but it provides “logistical and intelligence support” for its campaign and may assist with direct targeting support. The United States and other coalition supporters should press the coalition to abide by its international legal obligations and investigate alleged violations in any attack in which they played a direct role.

“Saada City’s streets are littered with bomb craters, destroyed buildings, and other evidence of coalition airstrikes,” Whitson said. “The civilians still living there can do little to protect themselves from the air attacks, which add to their daily suffering.”