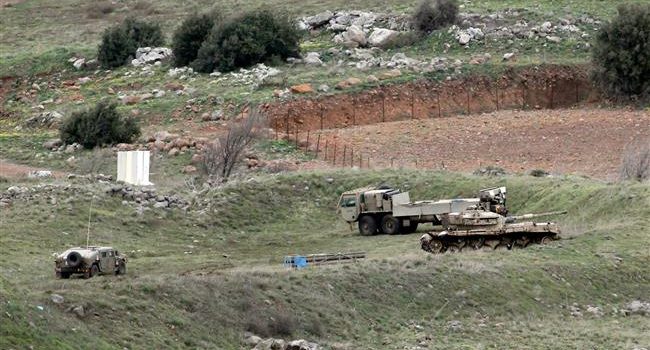 An agitated Israeli military has reportedly deployed anti-missile systems to the Syrian border, a day after it lost an advanced F-16 warplane in Syria’s first serious air defense operation to confront Israeli violations of its airspace.

The Jerusalem Post on Sunday cited witnesses as saying that they had seen convoys of “missile defense batteries” north-bound near the city of Baka al-Gharbiya. It said others had posted photos of “trucks carrying the batteries on central highways in northern Israel.”

The report said the Israeli army had “refused to comment.”

Early on Saturday morning, reportedly eight Israeli warplanes were deployed to target positions inside Syria. The Syrian military, which has previously absorbed occasional Israeli strikes, activated its air defense systems and shot down at least one Israeli F-16.

Israel claimed that it had earlier intercepted an “Iranian” drone, and that the warplanes had been dispatched to hit the site where the drone had been launched from, only to face Syrian anti-aircraft fire.

Iran rejected the claim about an Iranian drone as “too ludicrous to warrant a response.” And the Syrian military said it had responded to Israeli “aggression” and had hit more than one aircraft.

More than 24 hours after the incident, however, Israeli accounts of the developments were varied and confused. One Israeli report quoted the pilots of the downed F-16 — who parachuted out of the warplane — as saying that they realized they had been “hit” only after hearing an explosion. “[We heard] an explosion and realized we were hit,” Israeli Channel 2 cited them as saying.

Another said the pilots ejected “when they recognized that one of the missiles had locked onto their jet.”

Some Israeli reports claimed that a direct hit had not occurred and that shrapnel from an exploding missile had pierced through the warplane.

Trash talk, lots of it

The Israeli military has long boasted of superior aerial power. Before Saturday’s crash, the Tel Aviv regime had not lost a warplane in 35 years — since the first Israeli war on Lebanon, in 1982.

The downing by Syria of the Israeli jet worked to deflate that narrative, particularly since it was only the first time Syria was actively confronting intruding Israeli aircraft.

Various Israeli news articles and analyses reflected the sentiment that the self-proclaimed Israeli “invincibility” had been shattered. Reports spoke of “cracks” in Israeli “arrogance,” and “a blow to the pride” of the Israeli regime.

“The Syrian army will find itself under fire if it continues to cooperate and allow Iran to position itself on Syrian soil,” Katz said, repeating a paranoiac Israeli mantra about Iranian activity in Syria.

Iran has said it has no military presence in Syria and is only offering Damascus advisory military help.

Observers say that the downing of the Israeli jet sent Tel Aviv the message that Syria and other countries whose airspace is violated by Israel are now ready to stop those violations.

On Sunday, Israeli Prime Minister Benjamin Netanyahu suggested that the Israeli attacks against positions in Syria would continue.

He said the regime had conducted strikes after the downing of the F-16, which he said showed ” that our modus operandi has not changed one bit.”

Lebanon will defend its territory from Israeli aggression: Aoun