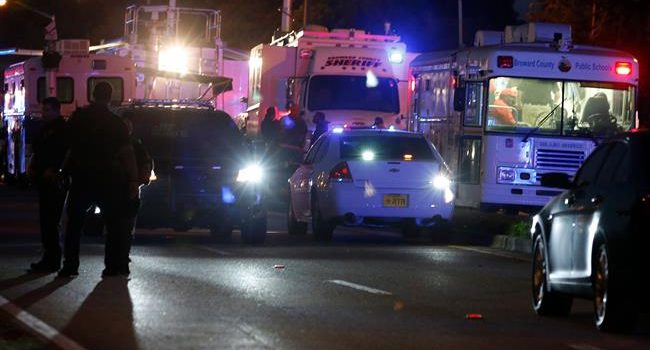 At least 17 people have been killed and several others injured in a shooting at a high school in the US state of Florida.

Florida Govover Rick Scott ordered government flags flown at half-staff through Monday in honor of victims of the shooting.

Authorities closed the school for the rest of the week, and the district will offer grief counseling to students and their families.

Police took a suspect into custody, announcing that the person was not a current student there.

The gunman, a former student who was said to be 19 years old, quietly surrendered to police after opening fire with an assault-style rifle.

Identified as Nikolaus Cruz, the shooter had previously been expelled for unspecified disciplinary reasons.

He was reportedly part of the US military-sponsored Junior Reserve Officers’ Training Corp (JROTC) program at the school, but “no one ever took him seriously,” according to a recent graduate and former fellow JROTC member at Stoneman Douglas High.

Broward County Public Schools Superintendent Robert Runcie, described that situation as “you pray … that you will never have to see,” adding that “We cannot live in a world that’s built on fear.”

“There are numerous fatalities. It’s a horrific situation.”

The school, which has more  than 3,000 students, was placed on a “code red” lockdown in the wake of the shooting.

Florida Democratic Senator Bill Nelson also said that “This is a really bad day,” adding there were “a number of fatalities.”

Police started dealing with the active shooter situation at the high school around 2:30 pm local time.

The Wednesday mass shooting at Florida high school was the 18th shooting at an school since the beginning of 2018, that is, one shooting every 60 hours.

There has been over 6,500 shooting incidents across the US so far, leading to the death of over 1,820 people and injuring more than 3,100 other.