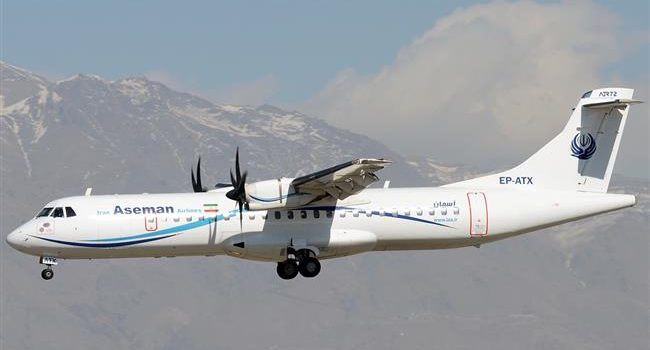 All 66 on board killed after plane crashes in central Iran

A passenger plane has crashed in central Iran during a flight from Tehran to the southwestern city of Yasuj, killing all 66 people on board, authorities said on Sunday.

The ATR 72, a twin-engine turboprop operated by Aseman Airlines, crashed in bad weather into Mount Dena near the town of Semirom, an official at the Iranian carrier said.

Local officials in Semirom said the crash site was hard to reach and rescue helicopters had been unable to land because of heavy fog and rain.

Spokesman for Iran’s emergency services Mojtaba Khaledi said rescue teams had traveled to the crash site by land and were trying to find the debris.

“The weather is currently cloudy and rainy and rescuers are searching for the plane but they have not sighted it yet. Despite the poor weather conditions, relief groups are continuing their search,” he said.

Air controllers said the plane went off radar screens 50 minutes after take-off from Mehrabad airport in Tehran at around 8:00 am (0430 GMT). The flight had 60 passengers, including a child, and six crew.

The Islamic Republic of Iran Broadcasting (IRIB) said the plane crashed around 23 kilometers (14 miles) from Yasuj, some 500 kilometers south of the capital.

Franco-Italian planemaker ATR  has a deal with flag carrier Iran Air for the delivery of 20 ATR 72-600 passenger planes. The company delivered eight aircraft in 2017 and plans to deliver a further 12 by the end of this year.

The 70-seat ATR planes are aimed at domestic routes, which Iran seeks to revitalize after the lifting of sanctions in early 2016.

Iran is also renovating its aging fleet for international or long-distance flights under deals signed with Airbus and Boeing to buy a total of 180 passenger jets.

The country has received three Airbus jets in 2017 – one Airbus A321 and two Airbus A33 – and was due to get another by year-end which did not come through. The first Boeing is due around May 2018.

Meanwhile, Leader of the Islamic Revolution Ayatollah Seyyed Ali Khamenei and President Hassan Rouhani have expressed sympathy with the bereaved families and offered their condolences to the people of Iran.

The Leader has urged responsible authorities to exert all efforts required by them in the aftermath of the accident, and ensure the honorable interment of the victims.

President Rouhani has also expressed “immense sorrow.” He called it incumbent on the Ministry of Roads and Urban Development to form a taskforce to arrange for timely emergency and relief response, and properly investigate the cause of the incident to prevent any future recurrence of similar tragedies.

Lavrov Calls on US “Not to Play with Fire in Syria”