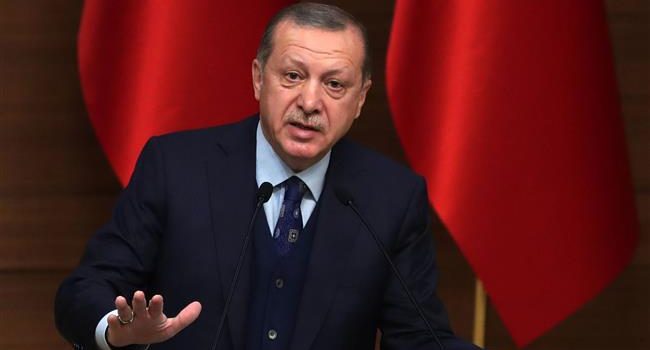 “Turkish forces will encircle Afrin’s center in the upcoming days. Thus, we will cut out any external help, so that nobody could strike a secret bargain. We will show those, who want to create a terrorist corridor on Turkey southern border, that it’s not an easy task,” Erdogan said at a meeting with lawmakers of the ruling Justice and Development Party.

Speaking further, Erdogan said that possible deployment of Syrian government forces into Afrin had been “halted through our communications.”

“Turkish soldiers will enter Afrin, and our flag […] will go up on a flagpole towards the height it deserves,” Bahceli told his party’s parliamentary group.

Prior to Erdogan’s speech, his spokesman Ibrahim Kalin said that media reports about the Syrian pro-government troops’ entry in Afrin district were “black propaganda”, but “secret bargaining” on this issue couldn’t be ruled out.

On Monday, a senior Kurdish official said that Syrian Kurdish forces and the country’s government had agreed on the deployment of Syrian army troops along border positions in the Afrin region to curb the Turkish campaign.

However, this information has been refuted by a YPG representative in Afrin Brusk Haseke, who had called them false and fake news in his interview to Sputnik, saying that the Syrian government forces would not enter Afrin.

Turkey has been conducting the “Olive Branch” in Syria’s Afrin since January 20, aiming at targeting the Kurdish YPG, allegedly affiliated with the Kurdistan Workers’ Party (PKK), which Ankara regards as a terrorist organization. Damascus has firmly condemned Turkey’s military campaign, calling it a violation of the country’s sovereignty.

According to the latest summary statement of the Turkish General Staff, issued earlier in the day, Turkish troops have killed and captured 1,715 militants of the Kurdish People’s Protection Units (YPG), the Democratic Union Party (PYD), and Daesh.