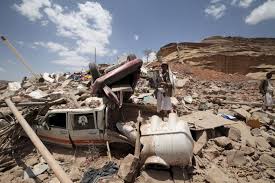 The Saudi aggression continues to launch raids on various regions and governorates, causing vast damage to property along with taking a citizen’s life and injuring another in Saada province.

In Saada governorate, a citizen was killed by Saudi airstrikes while another was critically injured by a rocket attack and Saudi artillery on the bordering province of Razih.

The Saudi-led coalition launched four raids on the district of Baqem. Moreover, Saudi rockets and artillery bombarded the district of Ghamr; resulting in the destruction of several homes and farms that belong to citizens.

In the province of Hajjah, five missiles were carried out on the districts of Harad and Medi.

In Najran, a Saudi governorate, The US-Saudi aggression launched a raid on the location of al-Shorfa.