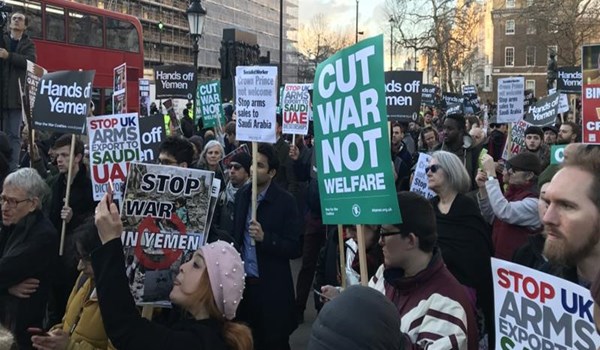 A Yemeni politician told a conference in London on Saturday the international community, including Britain, must put pressure on the Saudi-led coalition in Yemen to avoid further Massacres of the oppressed Yemeni people.

The world should “assert more pressure on the Saudi-coalition in Yemen, which has triggered the worst humanitarian crisis in the world. A military solution to the conflict in Yemen will never be the solution”, al-Hamdi, a former member of the Yemeni parliament who was ambassador to the Czech Republic from 2009 until 2014, said.

“History is repeating itself.  Saudi Arabia played a role in Yemen before its current intervention in Yemen, from the revolution in 1962 to the 1994 Yemeni civil war,” al-Hamdi stated at the event, which was hosted by the Cordoba Foundation and titled Yemen: War, Politics and Human Tragedy event.

“Yemen is being destroyed. A nation is dying,” al-Hamdi added.

The controversial three-day visit by the Saudi Crown Prince, also known as MbS, drew criticism from some sections of the British public, with protesters calling for his arrest for his many criminal acts on the oppressed civilians of Yemen.

Before he arrived, thousands had signed an online petition calling on Prime Minister Theresa May to cancel the trip over Saudi Arabia’s involvement in the Yemen conflict, which has killed thousands and caused what the United Nations and several countries say is the world’s worst humanitarian crisis.

When he was in London, protesters greeted MbS with chants of “hands off Yemen!”

“In reality, all sides in this conflict are motivated by power,” he stressed, adding that “Saudi Arabia is destroying all of the infrastructure in Yemen, especially military infrastructure.”

The Kingdom’s involvement is taking place as part of MbS’ consolidation of power within Saudi’s ruling family, he said.

British arms companies have profited from the war in Yemen, reportedly earning more than £6bn ($8.3bn) in trade with Saudi Arabia since Saudi regime started its military campaign in 2015.

On Thursday, Downing Street confirmed that new deals were signed with the Kingdom, to the tune of more than $90bn.

The Collapsed Yemeni Economy and Salaries-Cut Off, Why Yemen Is a Step Away from Famine?