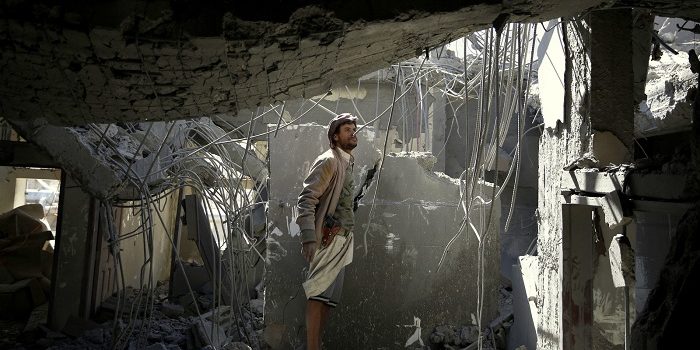 SANA’A, YEMEN – The Saudi-led coalition last week escalated its airstrikes on the biggest city in western Yemen — a region known as Hodeida, which is the lone remaining supply line for the millions of Yemenis in the north who rely on foreign aid for food, fuel, medicine, and other necessities

Ten of thousands of civilians in and around the port city have been displaced by the volley of airstrikes, which threaten to completely sever Yemen’s ties to the outside world, deepening a humanitarian catastrophe that is already the worst in the world.  Markets across Hodeida swelled with huge crowds of Yemenis trying to buy food and fuel before fleeing the airstrikes — which are targeting civilian populations, rather than rebel fighters who are comprised largely of the Shia Houthi sect

Saudi King Salman bin Abdulaziz Al-Saud said the kingdom was responding “firmly” to ballistic missiles fired March 25 aimed at the densely-populated Saudi capital Riyadh. The Saudis maintain that the rebels are aided and abetted by Iran but, in a televised television speech Sunday, the rebel leader Abdulmalik al-Houthi said that it is Saudi Arabia that is acting as a proxy for the U.S. in an effort to seize Yemen’s rich mineral resources and vital supply routes to the Middle East, Asia and Europe

Even before the escalation, the UN Security Council warned earlier this month that conditions in Yemen are deteriorating rapidly. Of a total population of 27.6 million, an estimated 22.2 million are now in need of humanitarian assistance.

Earlier, Amnesty International said intense fighting near Hodeidah had displaced tens of thousands of people, warning against the spread of clashes to urban areas and adding “the worst could be yet to come,” after surveying civilians who made the perilous escape from front-line towns south of Hodeida’s port.

Mark Lowcock, the UN emergency relief coordinator in Geneva, expressed concern over the decline of food imports to Yemen following the Saudi embargo, which remained well below pre-blockade averages. In a written statement, he said:

I am particularly concerned about the recent decline of commercial food imports through the Red Sea ports. … If conditions do not improve, a further 10 million people will fall into this category by the end of the year.”

Confidence among commercial shippers has eroded due to delays, “including as a result of inspections undertaken by the Saudi-led coalition after these vessels have been cleared by UNVIM,” Lowcock said, referring to a UN verification system.

The deputy chairman of the Yemeni Red Sea Ports Corporation, Yahya Sharafuddin, told MintPress that the four-year-old conflict had already resulted in the loss of 60 percent of port capacity in the country, or nearly $1 billion in losses.

The Hodeida attacks coincide with Saturday attacks in the northwestern province of Sa’ada and residential areas of the city of Sana’a, which left at least 41 civilians dead or injured A photo showcases a damaged petrol station after it was hit by alleged Saudi-led airstrikes on the outskirts of the Yemeni capital Sana’a on May 21, 2018.

In Sada`a, Saudi warplanes carried out airstrikes against the main road, killing three children and injuring 15 civilians. The President of the Yemeni Council for Rights and Freedoms, Ali Al-Mutamaiz, told MintPress that the Saudi-led Coalition has carried out 70 airstrikes in Sada’a since the war began three years ago.

Eight-thousand have been killed and injured in Sa`ada.  … 51 health centers and hospitals have been destroyed as well as 267 schools, and 84 generators and power stations as well.”

The foreign ministry in Sana`a said the attacks are consistent with the Saudi coalition’s policy of ethnic cleansing, which targets citizens and infrastructure such as the port A photo shows a wounded man in a hospital after injured in a Saudi airstrike that hit the main road in Sa`ada, northern Yemen last Saturday. May 28, 2018.

A source in the Yemeni defense ministry told MintPress that Yemeni forces destroyed 20 U.S. vehicles in a counterattack against the mercenaries hired by Saudi Arabia, and seized guns and ammunition left by the fleeing and captured soldiers This photo, provided by the Houthi media bureau of Army Operations to MintPress, shows burning of U.S. vehicles on the outskirts of Hodeida after targeting it, May 27, 2018.

On Saturday, Yemeni drones bombarded Abha International Airport in the kingdom’s southwestern province of Asir for the second time in more than a month, forcing authorities to suspend all flights to and from the regional airport. On April 11, the Yemeni Qasef-1 remote-control drones carried out a similar attack on the airport, which led to the temporary cancellation of all its flights to Jizan, Jeddah, and the capital Riyadh

The war devastating Yemen is now entering its fourth year. Saudi Arabia’s military and mercenary forces have killed or injured over 600,000 civilians, including more than a quarter of a million children, and the coalition-led blockade of Yemen has caused widespread famine

The main Source for this report is MintPress

US Special Forces Are Participating in the War on Yemen (Details)