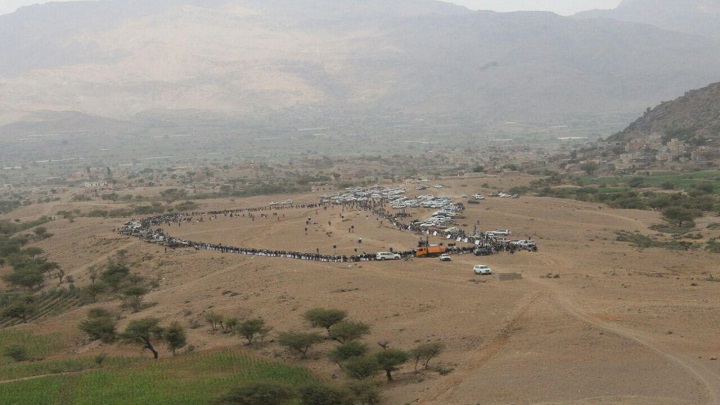 Report: A Tribal Meeting Held in Dhamar to Declare Support of the West Coast Front (Photos)

The tribe of Anas, with the four districts in it, “Duran, al-Manar, Jabal al-Sharq and Jahran in Dhamar province, held an extensive tribal meeting in response to the appeal of the tribes of Arhab and al-Jawf, in addition to Sayyid al-Houthi request of supporting the west cost front with men and artillery.

In the meeting, which was attended by Ansarullah chief of the aforementioned province, Fadhil al-Sharqi and the governor of Dhamar Muhammad Hussein al-Maqdisi pointed to the importance of the role of sheikhs and dignitaries and tribes of Anas in the mobilization to confront the aggression.

It was issued by the extended tribal meeting of the tribes of Anas in which they confirmed their acceptance to the request of Sayyid Abdul Malik Badruddin al-Houthi to support the west coast front until the defeat of Saudi-UAE assault.

The statement condemned the crime of the Saudi mercenaries of one of the prisoners of the army and the popular committees, dumping his body from a cliff of a high mountain in the district of Baqem, Saada province.