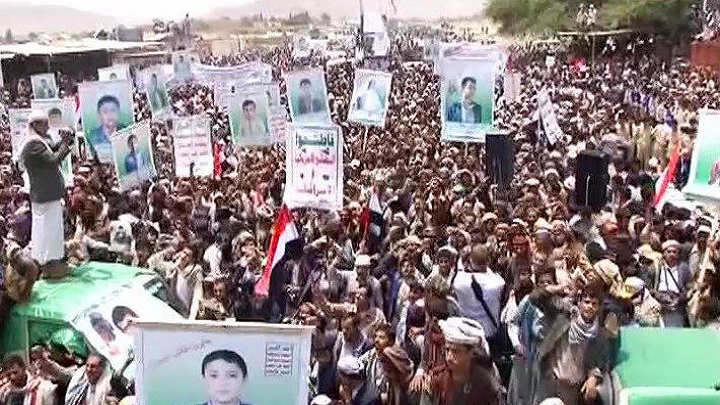 Thousands of citizens from all over Yemen participated in the funeral. They carried flags of the Republic of Yemen, photos of martyrs, banners of freedom and signs demanding the boycott of US and Israeli goods.

The mourners included official figures, such as the head of the Supreme Revolutionary Committee, Mohamed Ali al-Houthi, a number of ministers, members of the House of Representatives, military and security leaders, government officials and social figures.

The ceremony began with a mass rally in which participants chanted slogans condemning the crime and calling for revenge for the blood of the martyrs. They chanted “We will punish you in the fronts with our arms and slogan”

The crowds prayed on the children who were slaughtered by Saudi the Saudi airstrike in the public street, one of the largest streets in the city of Saada.

A father of one of the martyrs of the Saudi crime delivering a message to the Saudi-led aggression said ” I swear to Allah that you will not weaken our determination and the blood of our children will wash you away with God’s willing.

After the funeral prayer, the head of the Supreme Revolutionary Committee delivered a speech in which the crowds of mourners informed the salute of the leader of the revolution, Sayyid Abdulmalik Badruddin al-Houthi. He stressed that America is killing the Yemeni people by claiming that it has a strategic ally, Saudi Arabia, which is attacking our country.

He stressed that the crime of targeting children in Dahyan is the crime of America and its allies in the Saudi coalition, pointing to the statement of the US State Department, which said that Saudi Arabia has the right to liquidate all opponents.

He pointed out that it was not for Saudi Arabia and American officers in the command rooms to commit this massacre, if not issued by the US State Department.

He added that this bloody genocide against Yemeni children is symmetric to the ones that have been committed in Japan and other countries.

They committed this crime against children in Yemen after decades of the massacre of Japan, stressing that the children of the martyrs exposed the aggressors.

The Supreme Leader blamed America for the crime and all the previous crimes against the Yemeni people, which is considered hundreds, stressing that this crime confirms that the forces of aggression do not respect the laws and they are terrorists and criminals.

Houthi praised the missile force, which has become a ghost that frightens and intimidates the enemies, stressing that the Yemeni land, sea and air forces will continue their operations against the Saudi aggression.

After the speech of the head of the Supreme Revolutionary Committee, about 50 cars, covered with green fabric, carried the bodies of martyrs to bury them in their hometown, Dahyan, the city where the planes of the Saudi-led coalition has committed thorrific crime.

The Saudi warplanes committed the horrific crime of targeting a bus carrying children at the last day of their summer camp in Dahyan on Thursday (August 9th), killing 52 people, including 40 children, and 79 wounded, including 56 children.