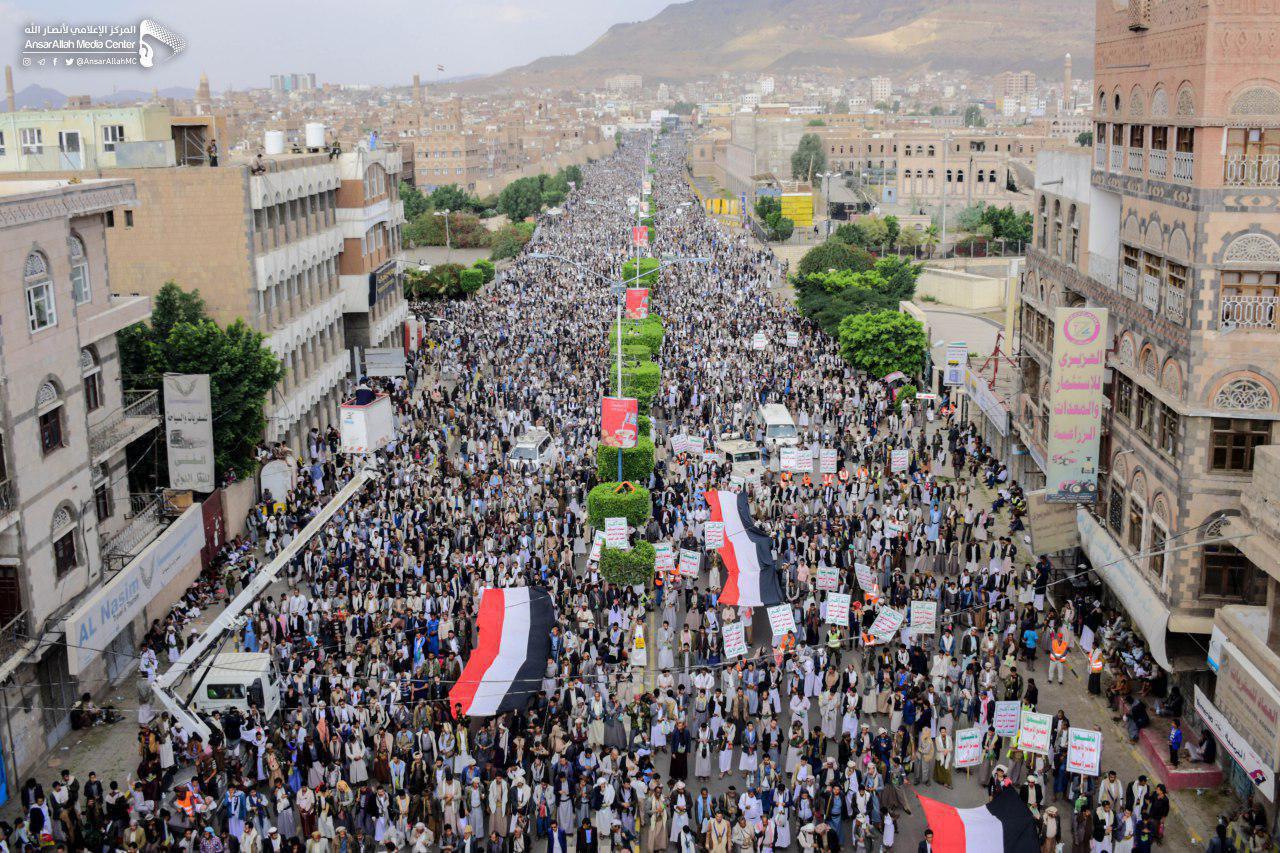 In the capital Sana’a on Friday afternoon, citizens marched under the slogan ” The Printing of the currency and high prices are tools used by the Saudi aggression”, in which the participants held America and Saudi Arabia, along with their mercenaries, the responsibility for the rise in the price rate of foreign currency against the national currency.

The participants condemned the economic war led by the Saudi-led aggression, which aims to starve the Yemeni people in conjunction with the military war and the suffocating siege imposed on the country for nearly four years.

A number of statements were said in the event, which stressed that the countries participating in the war on Yemen are trying to push the national economy towards mass collapse to achieve their dirty goals in the battlefields against the Yemeni army and the popular committees, with the coalition and their idiotic mercenaries.

“The international community bears full responsibility for the continuation of the Saudi aggression and the fall of the economic situation in Yemen,” said a member of the Higher Economic Committee.

Moreover, he called on the international community and international organizations to restrain the Saudi coalition and their mercenaries from printing more local currency, which has caused the deterioration of the Yemeni riyal, and the high prices that have afflicted with all Yemenis.

In addition, he warned the Saudi-led aggression from imposing any additional restrictions on the entry of ships and the port of Hodeidah or to impose new taxes and royalties on goods, which will only increase the suffering of civilians and the cost of living.

The Supreme Economic Committee called on the national delegation to include the issue of the transfer of the bank in the Geneva consultations and to compel the United Nations to meet its salary payment obligations.

Also, It has called on all citizens to not deal with the newly printed currency and to combine efforts and to confront the economic conditions imposed by the Saudi aggression and its mercenaries.

The Dean of the Faculty of Commerce and Economics at the University of Sana’a, Dr. Meshaal al-Rifi, pointed out that the aggressive Saudi-led coalition transfer of the Central Bank and ordering its mercenaries to print more than one trillion riyals without a cover of hard currency caused the rate of the Yemeni riyal to fall against the dollar, which caused prices to tremendously rise.

Additionally, he accused the forces of the Saudi aggression and its mercenaries of pursuing destructive monetary policy by using the central bank as a tool to print a vast amount of the local currency and withdraw foreign exchange from the market, while preventing the arrival of oil and gas revenues to the central bank’s treasury, which finally led to the collapse of the Yemeni riyal.

The statement of the demonstration emphasized that the decline and rise rate of the local currency against foreign currencies has led to the deterioration of the value of the national currency, which comes within the framework of a new type of war imposed by the Saudi aggression against all Yemenis.

Moreover, the statement held the Saudi-led aggression, the government of Riyadh and the branch of the Central Bank in Aden responsible for the disastrous results that led to the collapse of the local currency.

The statement called on the United Nations to fulfill its obligations in the disbursement of salaries of state employees, who are about one million and 200 thousand, where great damage has been caused on all economic and service sectors. The statement also obliges exiled ex-president Hadi to refund the funds looted in partnership with the United Arab Emirates.

In addition, the statement urged the government of national salvation to strengthen control and arrest all those complicit with the forces of Saudi-led aggression in the economic war against the Yemeni people.

Finally, the statement finished off by calling on Yemeni citizens to carry vigils starting on Saturday in front of the United Nations headquarters in the Yemeni capital of Sana’a, to denounce the economic crimes committed by the aggression against the Yemeni people and abide the United Nations by its commitments.