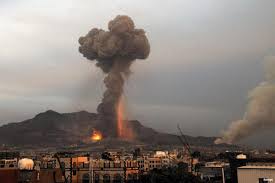 Analyst: The US Wont Stop Backing the Saudi-Led Coalition in Yemen

The American journalist, political analyst Stephen Lendman, said that the United States will not hesitate in stopping the support of the Saudi-led coalition against the impoverished country that is considered to be on the brink of famine because of the conflict.

In an interview that was broadcasted by PressTV, Lendman stressed that the war on Yemen will not stop and it is entering a new kind of level, which is considered to be the toughest and most aggressive.

The analyst said that the US declaration of the stop of aerial refueling services of Saudi-UAE warplanes is a ” bunch of baloney”.

Lendman expressed that the war against Yemen is being run through the US, while Saudi Arabia alongside the UAE and other countries are only a proxy in this war.

“The US is actively engaged in the war. It is a US war, not a Saudi war. The Saudis and UAE are US proxies.”

He added that war meant to affect the civilians of Yemen adding that, the whole aggression – “including not treating diseases, including starving them, including murdering them, including attacking residential neighborhood, hospitals, schools, mosques, agricultural land, marketplaces” — was orchestrated by the US, the UK, and France.

The Saudi-led brutal war against the people of Yemen will not end, and that is because of one main reason, which is that  ”America does not want to end it.”

Lendman added to the interview that the three countries are the top arms suppliers of Saudi Arabia alongside the United Arab Emirates. Washington, London and Paris’ pursuit are weapons sales and perpetual war, Lendman said.

Mirabian, an Iranian expert on Middle East affairs, urged the immediate stop of the Saudi-led war on Yemen, stressing that the longer the war stays, the more benefits the US, UK earn from arms sells to Saudi Arabia and the UAE.

He added that the US start giving off accusations to others so they can continue with their evil plans on the very poorest Arab country.

In an interview this week, US Secretary of State Mike Pompeo accused Iran of arming Yemen’s Houthi group—a charge Tehran denies—and said the challenge in the Arab country is in large part the responsibility of the Iranian leadership.

According to Yemen’s al-Masirah TV Channel, the ministry said the continuation of military operations is an obstacle to international efforts to bring peace to Yemen.

The ministry also called on the United Nations and the Security Council to protect the international peace and security against any threat.

The Yemeni Ministry of Human Rights also warned the Saudi coalition about the repercussions of attacks on al-Hudaydah Port, the lifeline for millions of Yemenis.

In a bid to disrupt humanitarian flows through the port city in western Yemen and to bring Yemenis to their knees, Riyadh launches horrible attacks on al-Hudaydah port, hence pushing innocent people to the brink of famine.

Over the past three and a half years, a coalition of several Arab countries led by Saudi Arabia has launched assaults on impoverished Yemen under the pretext of restoring power to the ousted Riyadh-friendly president Mansour Hadi.

The incursion has claimed the lives of thousands of innocent people, displacing a million others and razing the Arab nation to the ground.

Saudi Arabia alongside the UAE and many others began to bomb Yemen in 2015 and, imposing an overall siege on the country. Saudi Arabia bombardments have targeted most of the infrastructure in the country and destroyed thousands of civilians’ homes; thus, resulting in the displacement of more than 2 million Yemenis.