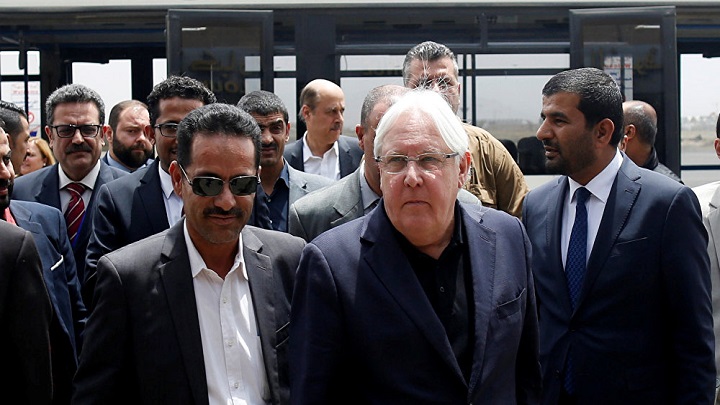 UN Envoy to Yemen Visits the Port of Hodeidah, Sends the World a Vital Message

United Nations special envoy to Yemen has gone on an important mission to the port city of Hodeidah after his two-day visit of the capital of Yemen, Sana’a, to deliver a message to the world from Hodeidah port.

The Secretary-General’s Special Envoy to Yemen, Martin Griffith, confirmed that his visit to the coastal province of Hodeidah bears a clear message to the world and the United Nations with interest in Hodeidah and how vital to keep its port operations to keep the flow and delivery of humanitarian assistance to the citizens.

In a press conference held today at a port of Hodeidah in the presence of the governor of Hodeidah province, Ayyash Qahim, the UN envoy said that he will work with the world to spare the city of Hodeidah any military confrontations or any damage of its infrastructure.

“I came here today with my friends and colleagues, Lise Grande, the UN humanitarian coordinator, and WFP director Stephen Anderson, to get to know directly how we can contribute to protecting people in Hodeidah from further destruction,” he said.

“I welcome the recent calls for a cessation of hostilities, and this is an essential step if we are to protect the lives of civilians and build confidence between the parties,” he said.

He explained that he met with leaders in Sana’a and discussed with them the engagement in the negotiations expected to be held in Sweden in the coming days, as well as maintaining peace in Hodeidah.

The UN envoy to Yemen caught sight of the extent of damage to the port of Hodeidah and its infrastructure, such as some of the damaged cranes, as a result of the bombing of the Saudi-led warplanes in 2015.

The Governor of Hodeidah Mohamed Ayyash and the CEO of the Yemeni Red Sea Ports Corporation, Captain Mohammed Abu Bakr Ishaq, gave a detailed explanation of the damage suffered by the port as a result of the bombing of the US-backed Saudi-led warplanes, and how the imposed Saudi siege on the country impacted the economy.

They also pointed out that the port’s activity is currently limited to in only receiving humanitarian aid ships affiliated with international organizations, and oil derivatives; however, they are still being subjected to a thorough inspection before entering the port of Hodeidah.

For his part, Martin Griffith discussed the solution regarding the port of Hodeidah, which is to neutralize the port and keep it away from political and military conflict.

It is noteworthy that on Wednesday, US Secretary of Defense James Mattis told reporters that Saudi Arabia and the United Arab Emirates have ceased offensive operations around Hodeidah. Mattis also said that peace talks aimed at resolving Yemen’s crisis are expected to take place in Sweden in early December. Nevertheless, Saudi aerial and ground shelling on the city still continues, resulting in casualties among the civilians.

The Saudi regime and its allies launched a deadly campaign against Yemen in March 2015 in an attempt to reinstall the country’s former Riyadh-allied regime and crush the Houthi Ansarullah movement.

The Western-backed imposed war, which has so far failed to achieve its stated goals, has, however, constrained humanitarian deliveries of food and medicine to the import-dependent state, leading to a mass cholera outbreak and starvation from famine.

On Friday, World Health Organisation spokesman Christian Lindmeier announced that almost half of Yemen’s children are chronically malnourished and face potentially crippling damage to their growth.

Furthermore, the international non-governmental organization Save the Children released a report on Thursday, claiming that an estimated 85,000 children under five may have starved to death in Yemen since 2015.

Nearly 85,000 Children May Have Lost Their Lives from Starvation; 11 Million Children in Need of Humanitartian Aid