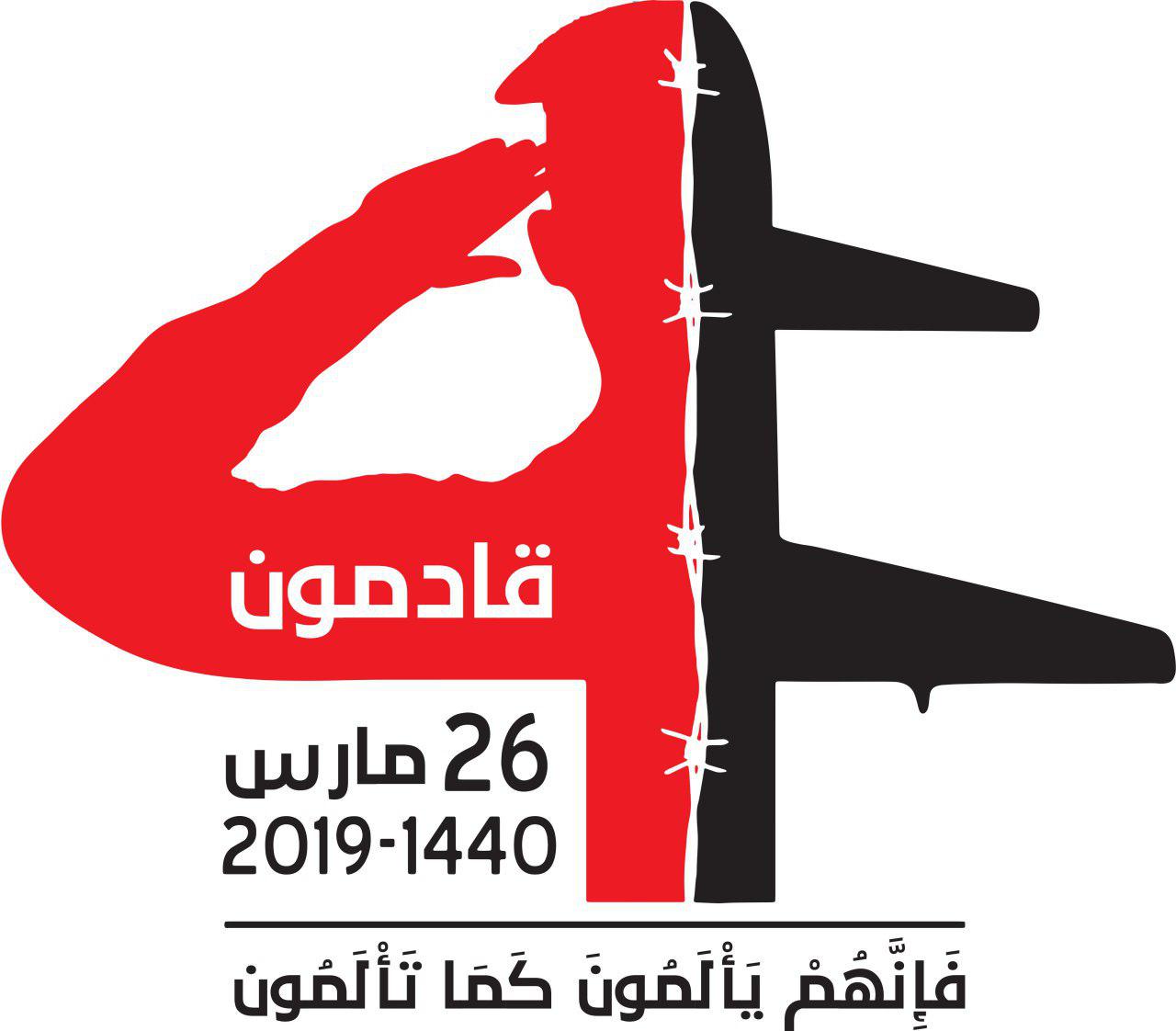 Statistics of 4 Years of an Aggressive War on Yemen

The Yemeni Armed Forces Spokesman Brigadier General Yahya Saree revealed new statistics of the Saudi-American aggression on Yemen and the confrontation of it for the last four years.

During a press conference in the capital Sanaa on Saturday, Brigadier General Saree said that the aggression launched more than a quarter of a million air strikes and dropped more than five hundred thousand missiles and a bomb, including 6000 thousand cluster bombs on Yemen.

Saree stressed that Yemen is capable of firing dozens of ballistic missiles that are manufactured locally 100% at one time, pointing out that the military manufacturing unit is constantly evolving and that the domestic industry is the main source of fronts.

22 countries including the entity of the Zionist enemy and foreign companies and tens of thousands of mercenaries participating in the Saudi-led aggression on Yemen.

The spokesman of the armed forces officially confirmed that the number of countries participating in the aggression on Yemen indirectly are amounted to be 22 countries, pointing out that Yemen has accurate details on the quality of the participation of each country involved in this war and these details will be disclosed in a timely manner.

The senior General also confirmed that the US role in this Saudi aggression against Yemen is clear and authentic. It is also a leading role and directs this war, adding that the participation of “Israel” does not need any more evidence than what has been said over and over again by leaders of the Zionist enemy and its media outlets.

The spokesman said: “we have material evidence of the participation of the Zionist enemy in the aggression on Yemen and will be disclosed in when the times come, stressing that the Zionist enemy participated directly in the aerial operations of the aggression, especially in the battles of the West Coast,” explaining that Western countries participated by deploying special forces in Yemen to carry out specific tasks freely and verbally. Saree pointed out that three countries announced their withdrawal from the coalition of aggression and ended their participation.

He pointed out that tens of thousands of mercenaries from inside Yemen and different nationalities are fighting in the ranks of the coalition of aggression, in addition to the participation of mercenaries security companies from several foreign countries.”We have monitored information and statements documenting it,” Saree affirmed.

The spokesman of the Yemeni Armed Forces said that since the first day of the aggression and even days ago, the number of air raids on Yemen exceeded a quarter of a million raids, pointing out that what was announced does not include all raids with its military and civilian targets and helicopter raids.

The military official also stressed that in four years, in Yemen, more than half a million bombs have fallen; this includes large and medium missiles and air, land and sea bombardment, adding that the air force had carried out more than 250,000 rocket bombs and at least 5914 cluster bombs and phosphorus were monitored.

The armed forces spokesman pointed out that the Air Force aggression conducted at least 2951 light bombs, 3721 sound bombs, and dozens of fragmentation bombs. The artillery bombardment of the coalition of aggression has exceeded 200 thousand bombs and rocket-propelled grenades, while the naval shelling of battleships and warships exceeded six thousand rockets.

Tens of thousands of civilian casualties

Brigadier General Yahya Saree confirmed that the coalition led by the Saudi-American aggression committed the most brutal massacres and destroyed the infrastructure to achieve its objectives and ambitions in Yemen, pointing out that the raids and bombing of the aggression led to the fall of tens of thousands between killed and wounded, including women and children.

He pointed out that all the people of Yemen were directly and indirectly affected by the aggression and siege, stressing that “military aggression and the commission of crimes imposed on our armed forces specific military options.

Saree: “We have 100% homemade ballistic missiles and we are able to launch dozens of rockets at once.

Spokesman of the Yemeni armed forces confirmed that the missile force represented a weapon of deterrence in confronting the aggression and that the nature of the battle with the enemy imposed the work on the comprehensive development of missile force within the strategic options.

Moreover, he pointed out that the missile force achieved great successes to the production of 100% homemade ballistic missiles, noting that the armed forces possess a strategic stockpile of ballistic missiles and the ability to launch dozens of rockets at once.

He also stressed that they own missile systems that are able to hit their targets accurately without being intercepted by enemy anti-missile systems.

Saree: “We have produced advanced generations of attack aircraft and our targets extend to Riyadh and the Emirate of Abu Dhabi.”

The spokesman of the Yemeni armed forces revealed that the experimental operations of the aircraft launched during the second year of the war, noting that the manufacturing and production of the air force are still ongoing and still being subjected to constant development processes.

Saree confirmed that since the entry of the air force in the battle, the unit carried out 164 operations and 1,362 reconnaissance and monitoring of enemy targets.

He pointed out that they have aerial photographs and coordinates of the dozens of headquarters and facilities and military bases of the enemy, stressing that the entry of the air force in the battles strengthened the objectives of the missile force by adding 300 military targets.

The senior official also stressed that the legitimate targets of the Yemeni forces extend to the capital of the Saudi regime and the Emirate of Abu Dhabi. Saree also said that there are production and manufacture of advanced generations of combat drones and that there are new systems will enter the service in the future.

The Yemeni naval forces were rebuilt from scratch, he said, noting that Yemen was not allowed to build strong naval forces. He then added that the armed forces would continue to work to build naval forces and coastal defense forces suited to the nature of Yemeni geography.

The Operations by the Engineering units during the past 4 years

He also pointed out that most of the enemy’s destructive mechanisms in Yemen are American, British, French and other countries, pointing out that in 4 years, 4763 armored vehicles and tanks were destroyed and damaged. “In the ground battle, our fighters had the upper hand to target the invaders’ walls and reinforcements,” Saree mentioned during his conference.

General Yahya Saree pointed out that hundreds of sniping operations are documented by the military media, where the best ones were on the border fronts with Saudi Arabia.

“Our forces have carried out more than 3,000 offensive operations throughout the combat operations. Thousands of offensive attempts by the enemy and infiltration attempts were all foiled by our forces.”

Brigadier Yahya Saree confirmed that the air defenses succeeded in dropping 19 Apache helicopters in 4 years, while more than 86 aerial encounters were successfully dealt with, seven of them achieved direct hits. Saree said: ” The air defense capability is being strengthened and several defense systems Subject to pre-battle operations.”

The senior official of the armed forces noted that the occupation of part of the Yemeni territory does not mean the defeat of the Yemeni people and does not mean the end of the battle, stressing that the armed forces will not abandon the implementation of its tasks in the liberation of the occupied territories and the preservation of national sovereignty.

“We are relying on the local industry to strengthen the fronts,” Brigadier General Saeed said.

The spokesman of the Yemeni armed forces concluded by saying: “our intelligence information confirms the existence of aggressive intentions within the process of military escalation of the enemy in Hodeidah, and that there is accurate monitoring of the movements of the enemy and our forces will take all the required actions regarding this matter.” Saree stressed that their forces are ready and have multiple options to deal with any developments along the West Coast.

March 17: Saudi Crimes in Yemen on a Daily Basis

Minister Of Health: More Than 100 Thousand Children Die Per Year Due To Saudi War