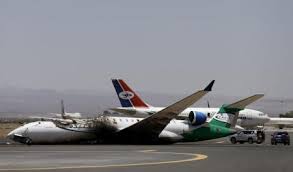 In a letter sent to the Secretary-General of the (ICAO), Dr. Fang Liu, on the occasion of the 55th anniversary of the accession of the Republic of Yemen to the Convention of Chicago, the General Authority of Civil Aviation and Meteorology has renewed their call to the UN Security Council demanding the opening of Sana’a International Airport. The Authority affirmed its commitment to the Chicago Convention and its keenness to find safe and sustainable civil aviation in Yemen in accordance with high professional and technical standards in cooperation with the International Civil Aviation Organization (ICAO).

The Authority said that “the US-Saudi aggression violates the Chicago International Convention and international laws and conventions by targeting civilian airports and restricting the freedom of citizens to travel and ban flights for civil and humanitarian flights from August 9, 2016, to Sana’a International Airport.” The Authority pointed out that the ban led to the isolation of Yemen and the restriction of the freedom of millions of Yemenis. It disrupted the movement of navigation in front of medical, vital and commercial supplies, considering that contrary to all Security Council resolutions that did not close the airports.

It also stressed that the closure of Sana’a International Airport is an individual decision issued by the Saudi Ministry of Defense, pointing out that this is a clear violation of the sovereignty of the Republic of Yemen and contrary to the provisions of the Civil Aviation Treaty of Chicago, which confirmed the full sovereignty of the state on its airspace.
The Authority pointed out that the aggression’s continuing in stopping the civil aviation traffic to and from Sana’a International Airport turned Yemen to a large prison and create a humanitarian tragedy, is the largest in the world with the testimony of the United Nations and international humanitarian organizations.

The Authority said that the deaths of patients who were in need to travel abroad, according to the statistics of the Ministry of Health, exceeded 32 thousand. 10 cases die on the way to the Airports of Aden and Sayoun as a result of the distance and unstable security conditions. The letter pointed out that the losses of the civil aviation sector amounted to over three billion dollars and affected 80 percent of employees in the civil aviation sector because of the targeting and closure of Sana’a International Airport.