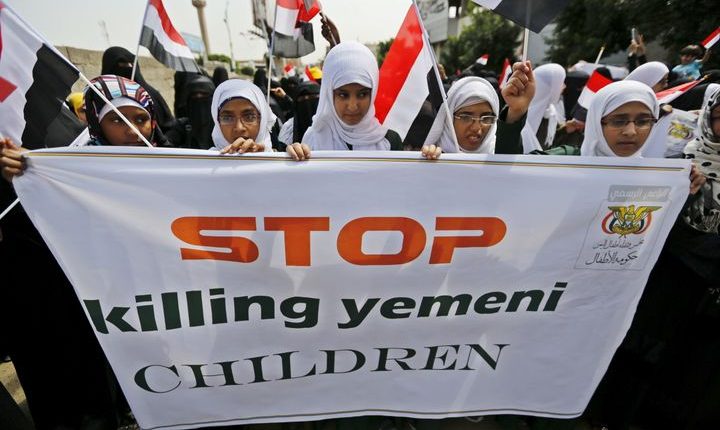 The US President Donald Trump insists on continuing arms sales and the support for the Saudi-Emirati coalition in Yemen amid the declaration of the United Nations that the coalition has killed more than 800 Yemeni children in a year.

UN reports and other reports by international organizations, as well as stands rejecting American support for Saudi Arabia and the United Arab Emirates within the US Congress, have so far failed to dissuade US President Donald Trump from selling arms and giving full support to the Saudi and UAE regimes. Trump used the veto for the second time against three congressional resolutions aimed at preventing arms sales to Saudi Arabia and the UAE in clear defiance of all stands and reports that stress that the US weapons and positions in support of Riyadh are the main cause of the continuation of the humanitarian disaster in Yemen.

In a letter to the Senate, Trump justified his use of the presidential veto, saying that these decisions weaken the competitiveness of the United States internationally and harm the important relations his country shares with its allies. Trump vetoed the decision made by the Republicans and Democrats in Congress to withdraw US support for the Saudi-led aggression last April, but Trump insisted to continue US support.

observers expressed their anger over US positions, accusing Trump and his administration of continuing to ignite the war in Yemen, arguing that US arms deals have exacerbated the humanitarian situation and has been the primary reason for Saudi Arabia and the UAE in continuing to kill civilians and commit massacres against children and women.

UN Secretary-General Antonio Guterich stressed in his annual report to the UN Security Council regarding the countries and armed groups that violate the rights of children in conflict areas to keep the Saudi-UAE coalition and the parties participating in the Yemeni conflict on a blacklist that resemble the violators of children’s rights, adding that the UN documented the killing and mutilation of more than 1689 children over the past year, adding that the Saudi-UAE coalition is directly responsible for the killing and wounding most of those children.

The report is the biggest evidence of the US president’s lies and falsifications of the facts. He has repeatedly claimed that his continued support for Saudi Arabia is reducing the damage on civilians. Trump is trying to cover up his financial greed by embezzling Saudi Arabia and plundering its money by supporting their barbaric policies in Yemen, which do not respect human and moral law and have created the world’s biggest humanitarian crisis. Trump’s administration has rejected all the reports, recommendations and demands to stop arming Saudi Arabia since the beginning of the war on Yemen, and insisted on its military and political support in Yemen instead.

In a clear sign of global terrorism against children, the UN report said this time that Saudi Arabia, the United Arab Emirates and the Israeli occupation entity were on the blacklist as child killers. If we link the continuation of the American support and Trump’s insistence on supporting Saudi Arabia and arming it for waging this dirty war, and the barbarism of Ibn Salman and his inhumane war against the children of Yemen, the result will be that the children of Yemen have become victims of the financial greed of Trump who looks at the killing of Yemeni children as a way to profit and embezzle the leaders of Saudi Arabia and the UAE through deals. In addition to the barbaric son of Salman, who wants to make history, heroism, and leadership from the dead bodies of children and women in Yemen.

July 27: The Daily Update of the Saudi-Led Crimes Against Yemen