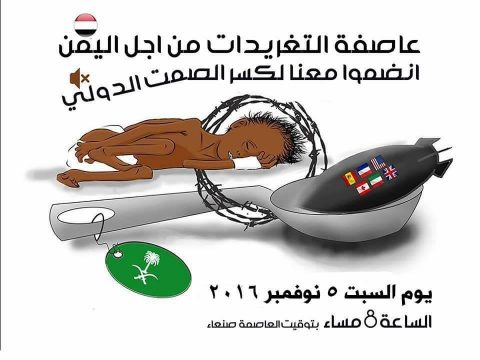 A Twitter Campaign to Break the International Silence Towards Starving Yemenis

A twitter campaign has been launched today Saturday at eight o’clock under the slogan “Lets break the international silence towards the US-backed Saudi siege and the starvation of Yemeni people.”

The campaign comes in light of the remarkable insistence of the US-backed Saudi coalition on imposing  an economic siege and continue a war on the Yemeni people. The coalition has also been responsible for besieging Yemeni children and the looting of the Yemeni land’s bounties.

Activists called for the participatation in the tweets campaign to contribute in breaking the imposed siege and expose the international and internationalist complicity that is being taken advantage of by the coalition to hide its war crimes against Yemeni civilians.

The following is the tweets link:https://sites.google.com/site/usakillsyemenipeople/home