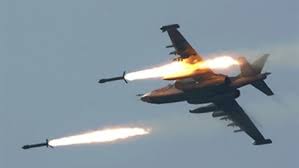 Warplanes of the US-backed Saudi coalition launched on Saturday morning several raids on Al-Talh area directorate of Sohar in Saada.

A military source said, the Saudi American aggression launched a series of raids on the Al-Talh in Sohar.

Dozen of Martyrs and Wounded in Sana’a