Yemen booked their place in the 2018 AFC Under-16 Championship, to be held in Malaysia next year, with a 2-0 victory against Bangladesh in their Group E match at the Grand Hamad Stadium in Doha yesterday.
Yemen, who had beaten hosts Qatar 6-1 in their opening match, found the going tough against their South Asian opponents, especially in the first half.
But a penalty, seconds before half-time, converted by defender Sultan Yousef Thabit, and a goal in injury time by Osamah Samer al-Baadani ensured their progress. Now Qatar will have to beat Bangladesh in the final group game tomorrow to keep their qualifying hopes alive as one of five best second-placed teams. The Yemen-Bangladesh match started on a slow pace. It was Bangladesh who got the first opportunity after Miraj Molla escaped the attention of two defenders as he surged into the box, but Yemeni keeper Abdullah Abdulhakim al-Sadi dived to his left to gather the low shot.
Two minutes later, it was the turn of Molla’s strike partner Foysal Ahmed Fahim to give the Yemeni defence a big scare, but he too could not score.
Yemen had to wait until the 44th minute for their first meaningful effort, with Tamer Nadhel Sanen sending an almost perfect pass to Yahya Esam al- Baleeet, but the Bangladesh keeper avert the danger.
A minute later, Yemen took the lead. Bangladesh conceded a penalty as defender Sanowar Hosen Lalmia fouled Tamer Nadhel, and Sultan Yousef Thabit, who had scored from the spot against Qatar as well, gave goalkeeper Samiulla Bashar no chance.
Bangladesh came closest to equalising when Dipok Roy and Akkas Ali combined well with a free-kick but the former’s shot was well saved by Al Sadi. Yemen, playing a much better game in the second half, had an opportunity to double their lead when Tamer Nadhel got onto the end of a long pass from the midfield.
However, with the keeper out of his area, he sent his volley over the bar. Bangladesh tried to come back into the game in the dying moments of the match but it was Yemen who finished the stronger and Osamah – who had good game against Qatar – showed his composure again to beat Samiulla.
Yemen coach Sabah Khatam was proud of his players. “I’m very happy for my players. It was a tough match but the most important thing is we won. Now we can start the preparations for the Championship in Malaysia. The boys were under immense pressure and so they had to play well.” 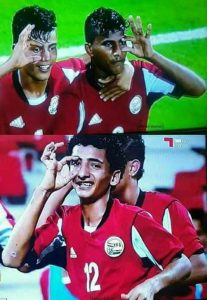