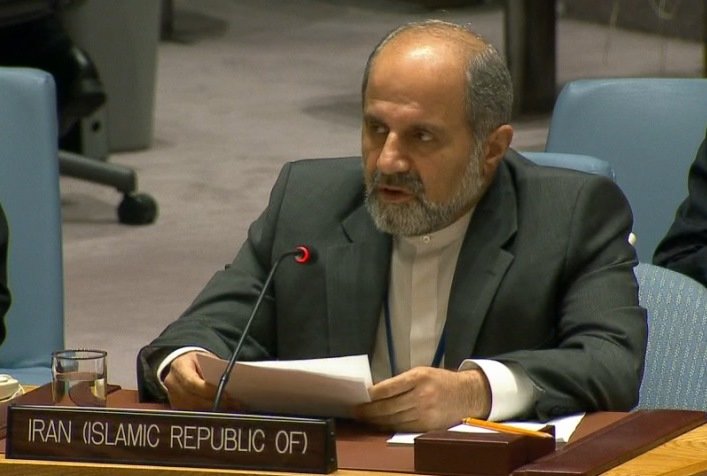 Iran’s deputy permanent representative to the UN has said that Saudi Arabia is killing more children in Yemen than “Al-Qaeda, ISIS and Nusrah put together around the globe”.

Eshaq Al Habib made the remarks during a speech at the Third Committee of the United Nations General Assembly on Tuesday.

Following is full text of his speech published by IRNA:

The great writer and philosopher, Leo Tolstoy, once said that an arrogant person considers himself perfect. This is the chief harm of arrogance. It interferes with a person’s main task in life–becoming a better person.

The same seems to be applicable to countries. Those who are so much concentrated on others that terribly fail to see violations happen in front of their own eyes. Complacency and arrogance often lead to loss of reasoning and sound judgment.

If only one reason was needed to prove how debased Third Committee has become to consider country specific situation the Saudi intervention provides that. Saudi, a bad child killer that has recently upgraded to a good child killer kills more children in Yemen than Al-Qaeda, ISIS and Nusrah put together around the globe. However, spending billions of dollars buying beautiful arms and western public relation corporations cannot hide the real face of Saudi, whose money also fuels sectarianism in the Persian Gulf, Middle East and the world. Similarities of the atrocities committed by the ISIS and Saudis like beheading are not accidental. They are rooted in a common ideology and worldview that considers the other Moslems and non-Moslems infidel and heretic.

If the staggering number of Yemeni kids killed by Saudi missiles (beautifully made in the U.S. and UK) are not strong enough to reveal the true face of Saudis,

If thousands of Syrian kids who were murdered by the terrorists funded, dispatched and ideologically nurtured by Saudis are not enough to expose their hypocrisy on human rights, if the systemic violation of human rights of minorities inside Saudi is not sufficient enough to alarm the world,

If the silent genocide happened in Saudi eastern city of Awamiya is not strong enough,

If the ruthless silencing of all dissidents who dare to criticize the unelected royal family is not worrying Saudi allies,

If the official slavery of hundreds of thousands of women and girls migrant workers inside Saudi and their abject living conditions do not speak of the horrible nature of Saudi system, and if the number of Saudi members of Al-Qaeda, ISIS, Nusrah Front and other terrorist organizations around the globe are not reflecting the destructive mindset of Saudis,
then, something is going seriously wrong and then the world should await for even worse human rights violations and even more serious atrocities.

Saudi Arabia needs to be stopped of abusing and ridiculing international fora. Saudi being a partner in the global fight against terrorism and intolerance is blatant mockery of humanity, human rights, justice and peace.”

Yemen: Save the Children, 130 kids die every day