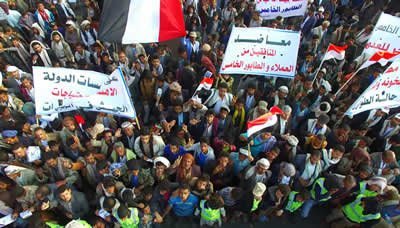 Tribes and sheikhs of al-Marashy district of Jawf staged a protest rally to condemn the continuation of Saudi aggression and the blockade on the Yemeni people.

When the rally attended governor of Jawf Salam Ali al-Malahy, the protesters also condemn the International silence toward the suffering of the Yemeni people from the aggression and siege.

They appealed the international community to stop the aggression and lift the siege.