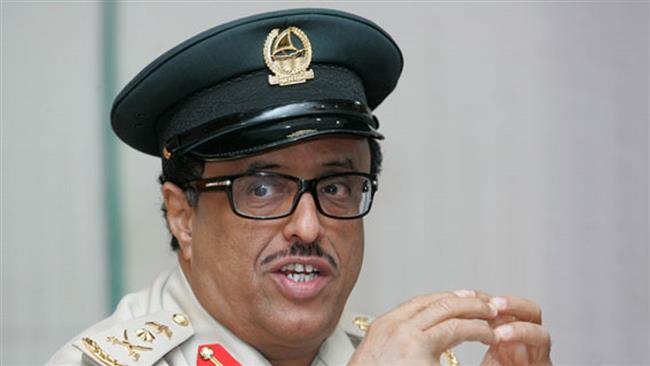 A top security official in the United Arab Emirates (UAE) has called on the Saudi-led coalition attacking Yemen since 2015 to bomb the Qatari media network Al Jazeera.

“The alliance must bomb the machine of terrorism … the channel of Daesh, al-Qaeda, and the al-Nusra front, Al Jazeera the terrorists,” Dubai security chief Dhahi Khalfan tweeted.

The UAE is a partner in the bombing campaign against Yemen. It is also part of a Saudi-led bloc that cut ties with Qatar and imposed a blockade over the country in June.

In his diatribe, Khalfan blamed Al Jazeera for the Friday terror attack in Egypt’s Sinai Peninsula that killed 305 people and injured 128 others.

“For how long will they [Al Jazeera] continue to tamper with the security of Egypt and the Arab world?” he asked, blaming Al Jazeera for the assault.

No group has claimed responsibility for the Sinai attack but Egyptian officials have said the attackers were a group of 25-30 men who carried Daesh flags.

Khalfan is known for making controversial remarks in the past, including calling on Arabs to unite with Israel, supporting US President Donald Trump’s travel ban against Muslim countries, and urging Doha to decide against hosting World Cup 2022.

The Saudi-led bloc has presented Qatar with a 13-point list of steep demands, including its closure of Al Jazeera, before the countries restore ties.

Qatar has rejected the demands, denouncing them as interference in its internal affairs.

UNICEF: More than 11 million children in Yemen in acute need of aid