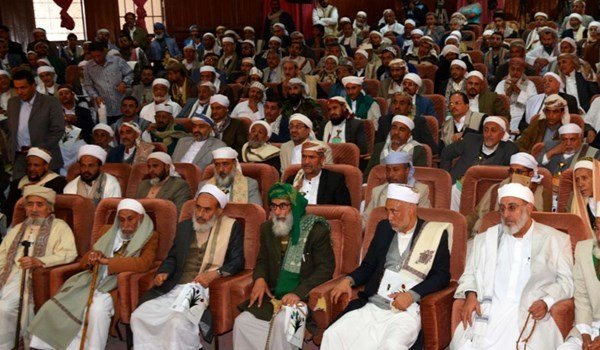 Yemeni scholars call for a ‘general mobilization against Saudi invaders’

A group of Yemeni scholars held a convention in the Yemeni capital Sana’a to “invite people to join the mobilization forces to confront Saudis and Emirati enemies.”

Shaykh Shamsuddin Sharafuddin, the mufti of Yemen, said during the convention that the enemies must never imagine that the people of Yemen would surrender, because the Yemenis were those whom the Prophet Muhammad had relied on.”

He added, “We want everyone to participate in the war of defending dignity of Yemen and we call on the government to recruit soldiers. The scholars of different provinces also have the duty to push all people to the battle for freedom and independence.”

The current conflict is between right and wrong

The Yemeni scholars emphasized that this war “has worsened the situation in Yemen and thus they are trying to make the Yemeni people bow to the invaders and return to its past and be a servant for the arrogant powers of the world being the United States and Israel. That will never happen.”