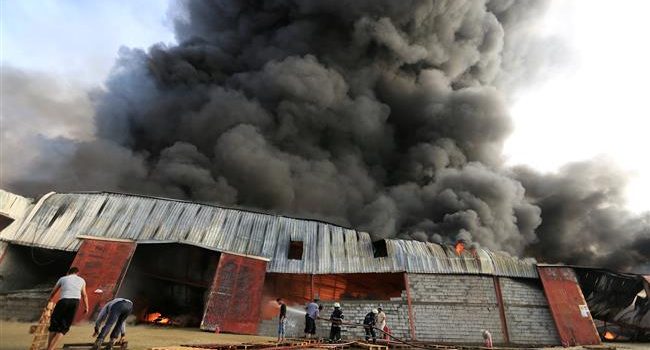 The blaze which broke out in the early hours of the morning on Saturday destroyed the warehouses filled with cooking fuel and foodstuff for humanitarian aid, a local source told Yemen’s Saba news agency.

The source also pointed out that the fire is still raging despite efforts made by firefighters.

“The fire destroyed huge amounts of fuel and humanitarian aid and foodstuff,” a WFP employee said, adding that there would be an investigation to determine the cause.

Hudaydah, a strategic port on the Red Sea, handles the bulk of Yemen’s imports, including critically-needed food and aid supplies.

The warehouses also contained hundreds of thousands of mattresses meant for those displaced by Saudi Arabia’s military aggression against Yemen, port workers said.

Saudi Arabia has been incessantly pounding Yemen since March 2015 in an attempt to crush the popular Houthi Ansarullah movement and reinstate former president, Abd Rabbuh Mansur Hadi, who is a staunch ally of the Riyadh regime. The Arab kingdom has also imposed a blockade on its impoverished neighbor, causing a dire humanitarian situation.

It has killed 14,291 civilians. Among the 14,291 killed victims are 2,086 women and 9,148 men, according to statistics approved by the Legal Center for Rights and Development.

The number of wounded has reached 22,537, of which are 2,284 women and 17,384 men, who have to accept their new reality of no longer being capable of living a normal life

Moving on to recheck on the damages inflicted by the Yemeni infrastructure, reports indicate that the Saudi regime targeted, with American intelligence support, 15 airports, 14 ports, 2,425 roads and bridges, 179 stations and power generators, 688 water tanks and networks, 410 stations & communication networks, 1,761 government institutions and 41, 3297 destroyed and damaged houses.

According to the latest statistics published by the Legal Center for Rights and Development, nearly 269 chicken and cattle farms have been bombed. In addition and amid an unprecedented famine witnessed in Yemen, the Saudi-led coalition struck 307 factories, 609 commercial markets, 6,912 business establishments, 722 food stores, 596 food tankers, 349 fuel stations, 262 fuel tankers and 3,757 transporters

Almost everything is a target in Yemen, including service facilities, whereas the most recent statistics report the bombing of 903 mosques, 309 hospitals and health centers, 869 institutions and schools, 141 university facilities, 264 tourism facilities, 112 sports facilities, 35 media establishments, 216 archeological sites and finally, while imposing a fatal siege on Yemen, 2,654 agricultural fields targeted.

“Hodeida should be supporting more than 20 million Yemenis. It should be the source of at least 70 percent of all imports to Yemen,” Suze van Meegen, a protection and advocacy adviser with the Norwegian Refugee Council, told AFP.

Earlier this month, the US Congress voted against a resolution that sought to end America’s support for the war.

Last week, the administration of US President Donald Trump approved weapons sales to Saudi Arabia totaling more than $1 billion, despite growing pressure from rights groups to halt arms deals between the West and Riyadh.

Amnesty International has slammed the United States, Britain and France for their continued arms sales to Saudi Arabia and the United Arab Emirates.

The UK-based rights group said the arms sales have been an “enormous harm to Yemeni civilians” over the course of the war.