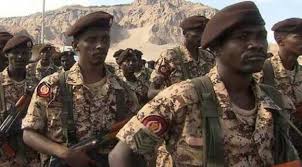 The announcement of a number of Yemeni businessmen in Sana’a for a high financial reward for anyone who would arrest or kill the Sudanese soldier who raped the Tahami woman.

The businessmen stipulated that those who submit to do so should document the scene and publish it to any media.

The announcement came after a Sudanese soldier on the outskirts of Khokha city  “West Coast” raping a Tahami woman last Thursday brutally, while she was collecting wood near Abu Musa al-Ash’ari camp.