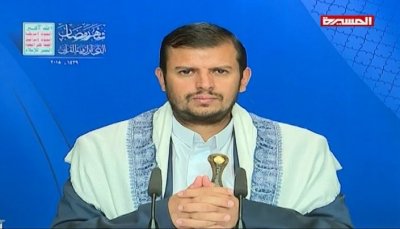 The leader of the Yemeni revolution, Sayyed Abdul-Malik al-Houthi, pledged on Sunday evening to defend the Yemeni western coast.

This came during a televised speech he delivered to the nation and aired by Al-Masirah TV channel, discussing the latest developments in the western coast battles.

Sayyed al-Houthi said it is not strange for the Saudi-led coalition forces to continue to commit crimes in the holy month of Ramada.

“Thousands of infiltrations and operations by US-backed Saudi-led coalition troops have been foiled, and the Yemeni people have lived many triumphs,” Al-Houthi said.

He noted that Saudi Arabia and the United Arab Emirates had paid billions of dollars to finance extremist groups in southern Yemeni provinces, exploiting the political problems the people suffered from in the past.

“The war on Yemen is a foreign military aggression,” al-Houthi said. “Some mercenary leaders of the Saudi-led coalition have recently complained over the coalition acts, and become aware that the coalition forces are occupiers.”

He added that the coalition troops have perpetrated blatant war crimes, massacres and crimes of raping women and children in Hodeidah and Aden provinces, even in the holy month of Ramadan.

“Those who bet on the support of foreign forces will never reach satisfying results,” he said.

He pointed out that the battle in Mocha city on the western coast is being run by UAE officers, who are under the command of Israeli-US operation room.

“The decision of invading the Yemeni western coast has been taken and adopted by the United States of America,” Sayyed al-Houthi said.

The US and Israeli official statements proved their key involvement in leading the military aggression on Yemen, he added.