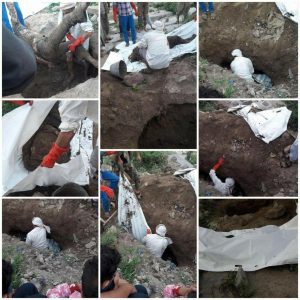 In the province of Taiz, a number of recruits were found killed and buried after they were slaughtered during clashes witnessed in Taiz governorate between the paid fighters factions of the Saudi-led coalition.

Five new bodies were discovered in  Madame Valley cemetery, where the bodies were of slaughtered recruited soldiers, pointing out that among the bodies were two bodies had their heads cut off, local sources said.

The bodies that were found were then taken to the al-Rawda hospital’s refrigerator.

This is the second cemetery to be discovered in less than a week, where it was found “four bodies” belonging to Saudi paid fighters who were executed in the city’s Republican district.

The city of Taiz is witnessing an ongoing conflict between the armed paid fighters factions of the coalition and insecurity situations as assassinations, killings, kidnappings, street fighting and others.

On Thursday evening, two unidentified gunmen killed a soldier in the 170th Air Defense Brigade, north of the city of Taiz.

According to media outlets of the Saudi paid fighters, gunmen on a motorcycle carried out the assassination of the soldier Imran Majid al-Adimi in the neighborhood of Rawda north of Taiz.

According to several reports, the Saudi-led air campaign against Yemen has driven the impoverished country towards humanitarian disaster, as Saudi Arabia’s deadly campaign prevented the patients from traveling abroad for treatment and blocked the entry of medicine into the war-torn country.