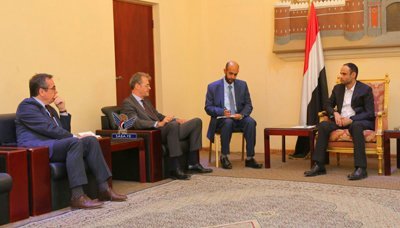 Mehdi al-Mashat, President of the Supreme Political Council, Mahdi al-Mashat met here on Saturday with the French ambassador to Yemen, Christian Testot, and handed him a letter to French President Emmanuel Macron.

During the meeting, the president affirmed the political council’s support for all peace efforts and its keenness to spare Yemenis’ blood.

Al-Mashat noted that the Saudi-led coalition states are continuing their US-backed war and military escalation, rejecting all initiatives and calls for peace and recent international movements led by the UN Special Envoy to Yemen, Martin Griffiths.

The president expressed hope for reopening the Embassy of the Republic of France in Sana’a to alleviate the process of communication and promote bilateral relations between the two countries, especially regarding economic aspects.

In his letter, the president expressed his hope that the French president would interfere to put an end to this war and that France would play a vital political role in achieving peace.

During the meeting, al-Mashat reviewed with the French ambassador the developments on the Yemeni arena in light of the continued war and siege, which led to the worst humanitarian catastrophe in the world.