Whatch : Popular protests against the coalition in southern Yemen ,protesters burn pictures and flags of UAE

A number of cities and provinces in south Yemen are witnessing civil disobedience and angry popular protests denouncing the policies and economic measures taken by the coalition and the government of Hadi, which have caused the local currency to weaken against foreign currencies, leading to a drastic rise in the prices of food and basic commodities.

A young man, from the city of Mukalla, was killed and several others were wounded ,Wednesday, after a big popular rally witnessed by the city demanding the US-backed Saudi-led coalition forces to leave from the southern and eastern provinces, under the coalition’s control, and denounced the deteriorating economic and security conditions in the province.

Our correspondent in Mukalla confirmed that the forces of the so-called “Al-Hadramiya Elite” killed young people from the city and wounded others after trying to disperse the demonstrators, in addition to arresting others, taking them to an unknown destination.

Demonstrators roamed a number of streets in the city and chanted slogans against the forces of the coalition, while tearing pictures and flags of the coalition’s leaders and burning and trampling them in protest over the deteriorating economic and security conditions and the absence of basic services. 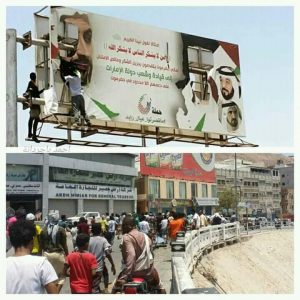 Popular protests against the coalition in southern Yemen, protesters burn pictures and flags of UAE

Our reporter photoed the city walls in which the words expressed the popular anger of Hadrami people in the face of the ccoalition, sking for the defeat of the coalition from every inch in the southern and eastern Yemeni provinces. 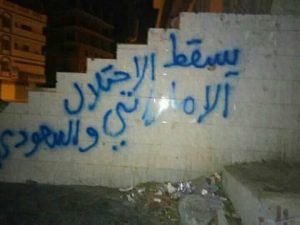 Popular protests against the coalition in southern Yemen ,protesters burn pictures and flags of UAE

A southern Yemeni activist and politician, on Monday, called for besieging Masheeq Palace and putting the fugitive former president Hadi’s government under house arrest in the southern port city of Aden.

The political activist, Anis al-Sharaf , said on a tweet that,” The civil disobedience is useless in the absence of any presence of the state in the southern provinces except by ending the sources of funding the government of Hadi.”

While scores of citizens opposed to the Hadi’s authorities imposed a siege on the commander of the first military region loyal to “Ali Mohsen al-Ahmar” in the city of Seiyun of Yemen’s Hadramawt province.

The vice president of the so-called “Southern Transition Council” , loyal to the UAE, Hani Bin Buraik, for his part, praised the angry popular protests against the government of Hadi in Aden.

Buraik said: “Aden is rising against the corruption of the Hadi government, and most of its people can’t afford their needs.”

The Political Bureau of the Southern Revolutionary Movement declared its rejection of the coalition, stressing the start of a popular revolution aiming clearly at full freedom, complete independence and rejection of subordination to anyone, whatever the circumstances and reasons.

“With this clear and frank rejection, our people have expressed their attitude on the coalition that supports the Yemeni legitimacy, which is the alleged legitimacy, whereas our people showed their rejectionist stance on February 21, 2012, considering it as a legitimate of occupation,” said the Southern Revolutionary Movement in a statement.

For the third day in a row, the southern and eastern provinces witnessed widespread popular demonstrations condemning the high cost of living, worsening economic conditions, and demanding the departure and expulsion of the coalition and the government of the ex-president, Hadi.

Aden city, which was occupied by the UK but now under the control of UAE, and the rest of the southern cities witness an insecurity situation that increased the assassinations of Imams of mosques and security and military leadership. The UAE took control of Aden under the pretext of confronting the so-called “Houthis”, part of the Yemeni army forces, and supported the establishment and formation of armed elements there.