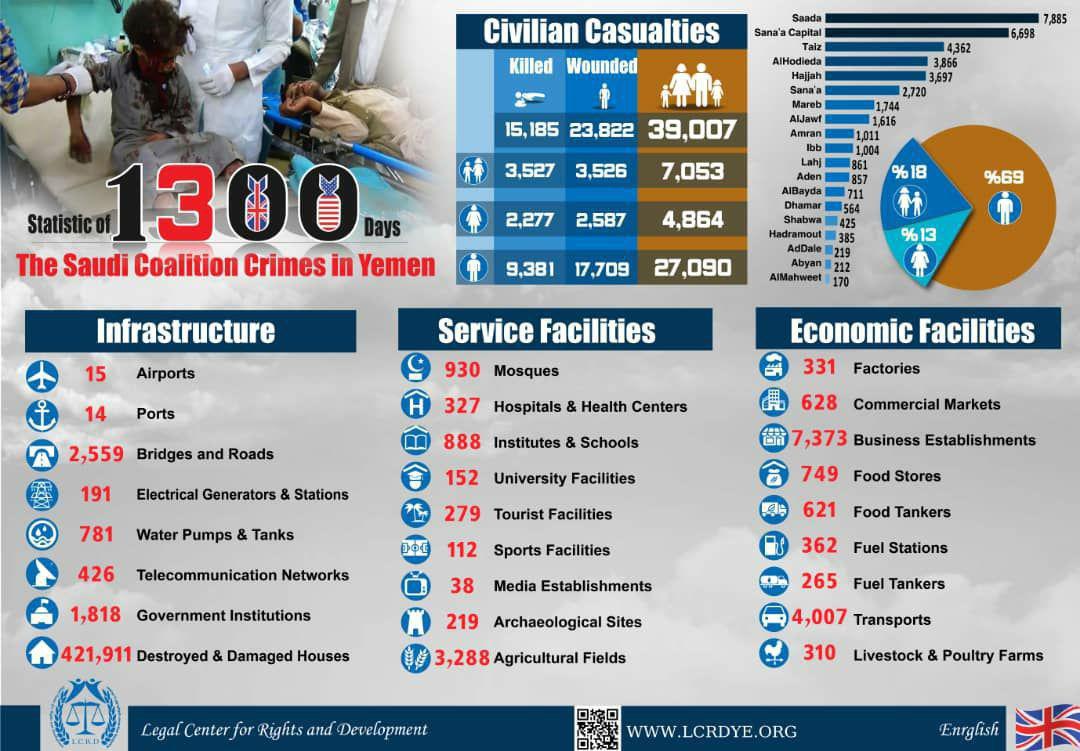 The Legal Center for Rights and Development on Monday issued a new statistics of the crimes that have been committed by the Saudi-led aggression in Yemen for the past 1300 days as a preliminary toll of the crimes committed by the aggressive coalition, where more than 15,185 civilians died, including 3527 children and 2277 women.

The center reported that at least 23,822 civilians were injured, including 3,526 children and 2,587 women, who are still suffering from a lack of medicines, medical supplies and quality treatment due to the siege imposed by the aggressive coalition, where this is fact is being disregarded by children’s organizations and human rights.

The legal center also estimates the death of at least 160,000 patients, this includes children, the wounded and those suffering from chronic diseases who are in danger of facing death soon due to the siege imposed on Yemen, which resulted in the lack of basic necessities, medicines and medical services.

The center adds to the toll of death about 2,200 Yemenis who died from a cholera epidemic, which has swept the country since the beginning of this year, according to the World Health Reports and UNICEF.

During these 1300 days, the Saudi-led aggression had destroyed continuously Yemen’s infrastructure by its bombardment, where it has directly targeted 15 airports and 14 seaports, as well as damaging roads and bridges, 2559 in total, 781 water storage tanks and supply networks, (191) power stations and generators, and (426) communications network, causing the most vital installations in Yemen to go out of service, which reflects disastrously on the lives of all Yemenis.

The Legal Center notes that these figures do not reflect the final outcome of the killed, the wounded, the deceased, the civilian, service, and production facilities. In order to verify these figures, the Center calls for the formation of an international commission of inquiry to assess the scale of the disaster.

The Legal Center reiterated to the United Nations to take into account its responsibility to abide by the protection of human rights and the rules of international humanitarian law in Yemen, the most important of which is to protect civilians and the population.

The center also called on the international community to shoulder its legal, moral and humanitarian responsibilities towards this biggest tragedy since the end of World War II, according to the organizations’ reports, stressing the necessity of urgent international and regional action to end the Saudi aggression against Yemen.

The center also called upon Human Rights Council team on Yemen to assume its responsibilities and carry out a serious investigation into the crimes committed against civilians in Yemen in a professional and impartial manner for insurance.

Yemeni Army Advances in the Saudi Province of Najran