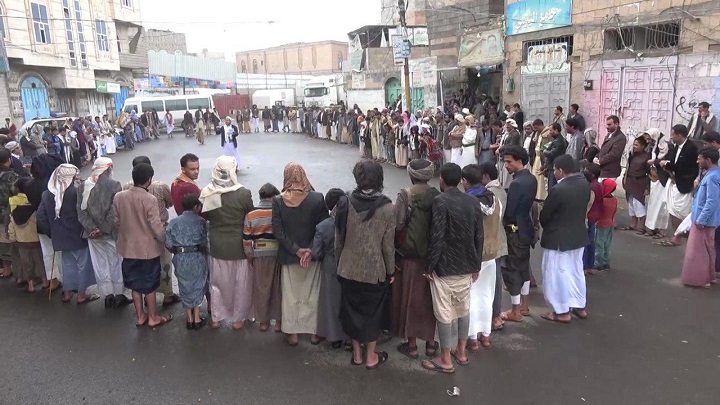 People of Sana’a Express Outrage on the Saudi-Led Aggression

A number of districts in the capital, Sana’a, went on public rallies after Friday prayers to confirm the continuation in confronting the Saudi-led aggression and mobilizing the fronts.

The citizens carried out after the Friday prayer rallies in different districts in Sana’a, on the occasion of the passage of 1300 days of the war that the Saudi-led aggression carried out on Yemen, stressing that this period of US-backed Saudi aggressive war on Yemen had made the Yemeni people more cohesion and united with greater determination to fight this Saudi-UAE occupation.

During the various rallies in the capital, participants stressed the need to hold on the principle of social solidarity because it has been a Yemeni inheritance that people carry generation after another.

The citizens stressed during the event the support of the fronts with fighters and convoys, demanding the government to take care of the agricultural side and alternative solutions to achieve self-sufficiency and increase the strength of the Yemeni people.

Saudi Crime Results in Killing Three Yemenis and Injuring Others

Recorded Crimes of the Saudi-Led Coalition on 19.Oct.2018