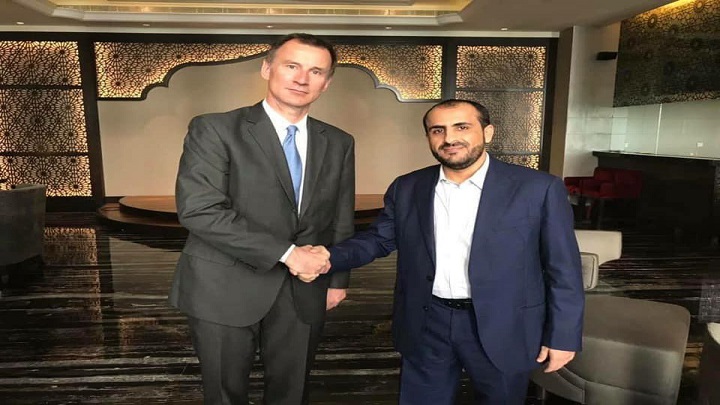 During the meeting, the head of the delegation reviewed the most important challenges facing the Swedish agreement and the obstacles that the aggressive coalition is doing to evade the implementation of the agreement and push things towards military escalation and thwarting the agreement.

Abdel Salam stressed the adherence of the political leadership in Sana’a to the Hodeidah Agreement and all agreements as approved in Stockholm and rejected any attempts to introduce new conditions outside the provisions of the agreements.

He pointed to the attempts of the backed coalition parties of aggression that aim to avoid agreeing on the plan submitted by the Chairman of the Coordination Committee Michael Lollesgaard for the first phase regarding the redeployment plan after the approval of all but they returned to set conditions and the introduction of new issues.

The head of the national delegation was shocked by the silence of the United Nations over this intransigence, pointing out that this silence is tempting the coalition of aggression more.

“Our delegates of theCoordinating Committee remained committed to the first phase plan as presented by Michael and prepared to implement it unilaterally if the United Nations asked us to,” Mohamed Abdel Salam said.

The British foreign minister confirmed the support of the agreement, expressing concern over the delay in implementation, which should be carried out as soon as possible.

He also stressed the continuation of his country’s efforts with all parties in Riyadh and Abu Dhabi to push the peace process forward.

Al-Ajri said in an interview with Al-Masirah Arabic channel that it is difficult to proceed with advanced steps in implementing the agreement of Sweden without the pressure of the United Nations on the other side.

Al-Ajri pointed out that the other party is trying to achieve political gains at the expense of the implementation of the agreement, stressing that the national delegation deals with the agreement from the humanitarian aspect aims to spare the city and the port, which is the only artery of millions of Yemenis that keeps them alive because 80 percent of imports go through this city.

The member of the delegation then called a warning on these parties if it seeks to achieve political goals exploiting the humanitarian situation in Hodeidah, which is a coup against the Swedish agreement.

The head of the Supreme Revolutionary Committee, Mohamed Ali al-Houthi, commented on British Foreign Secretary Jeremy Hunt’s remarks regarding the implementation of the Swedish agreement, criticizing Britain’s role in the aggression against Yemen.

“Jeremy Hunt knows very well that the Yemeni people know that Britain is an active partner in the aggression against Yemen,” Houthi said in a series of tweets.

He said that the British draft resolutions do not allow him to be an honest broker entitled to show a neutral voice.

Houthi described Jeremy Hunt’s statements as aimed at improving the image of the countries of aggression that commit massacres and famine on Yemen.

The chairman of the supreme revolutionary committee said that after the leader of the revolution had offered to start unilateral withdrawal, it became clear to the world who was blocking peace.