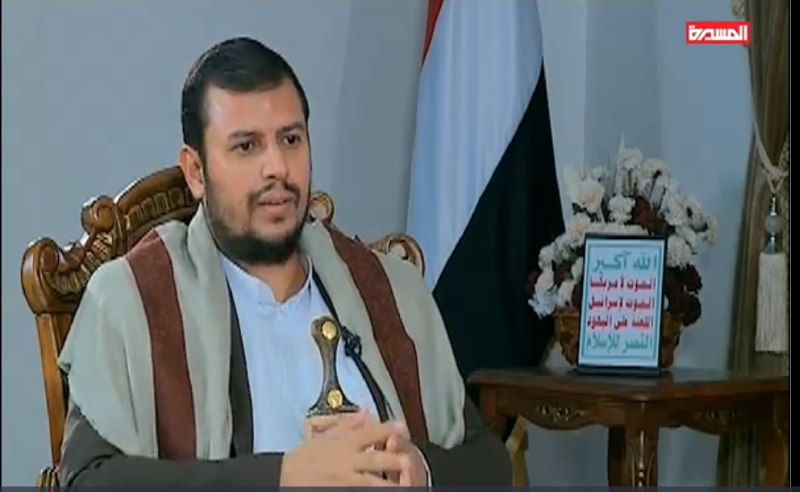 Sayyed Abdulmalik Al-Houthi appeared in a TV interview, the first of its kind, on Almasirah TV. This is his first time to be hosted in an interview and even though he is frequently speaking to the masses from time to time in televised speeches, a TV interview presents a new level of public interaction. Due to many reasons including the security of Sayyed Abdulmalik, he has been only communicating with people through his speeches, but it seems that the challenges are requiring a more interactive form of speech. This interview comes around very sensitive times of the US-Saudi aggression and Sayyed Abdulmalik differently has chosen the right time to communicate important messages. The interview covered a variety of subjects naming a few US-Saudi aggression, the regional situation and the vision of the Yemeni People facing all different kinds of challenges.

Many important messages were delivered to different parties involved in the current situation in Yemen. The main share was directed at the enemies of this country and specifically at the U.S., U.K., Saudi Arabia and UEA. The leader of the revolution, Sayyed Abdulmalik explained how the length of the aggression against Yemen will not affect the steadfastness of the people and its stability. “the American with his tools will face serious defeat in the region,” he promised. The U.S. and U.K. involvement in the aggression is not limited, not at all, Sayyed Abdulmalik pointed out to the role they play in even dialog between different Yemeni parties. “Ambassadors of the US and UK participate in some negotiation rounds but they are keen to present it as an internal Yemeni dispute,” he said.

For the Saudi and Emirati destructive role in the region, he thinks that there mission doesn’t extend beyond the task assigned to them by the U.S. “The Saudi and Emirati trap in Yemen contributed to its failure and effect in pushing Trump’s Deal,” emphasizing that “Saudi Arabia and the UAE are not regional empires, Trumps has said that the Saudi cannot last for two weeks.”

Sayyed Abdulmalik warned those orchestrating the aggression against Yemen. For tools like Saudi Arabia and the UAE, he promised them a strong response that put them under great pressure to stop this aggression. “The escalation in the border with Saudi Arabia is significant and is pressuring the Saudi regime”, he said. The fact that the Saudi Army has failed to defend their land and only mercenaries now fight instead of the Saudi soldiers, should be a good indication of the failure of this aggression. “If the aggression’s practices against us continue, our People has the right to develop military deterrence options,” Sayyed Abdulmalik said. He pointed out that our missiles capable of reaching to vital and sensitive targets in Riyadh and beyond, Dubai and Abu Dhabi. “We work on the development of different military units and its production abilities,” he added.

On the Stockholm agreement, He explained that there has been always a chance to advance the implementation of different parts of it, but even the UN has asked to postpone some of these steps. The negotiations never showed promise and the national side has chosen to deal with them to expose the reality of the enemies call to peace. “The enemy did not, seriously, meet for any just or logical solution for the crisis.”

“It is assuring, what we see from our People of sacrifice, patients regardless of all difficulties. All should continue in providing to the front-lines with money and weapons to support the heroes of our fighters”, he said.

Sayyed Abdulmalik with a thank you to all those supporting the Yemeni People through it hard time. “We thank the Islamic Republic of Iran, the people and the government. We feel assured with the empathy, with our case, of some handcuffed people like Egypt and Tunisia”, he concluded.