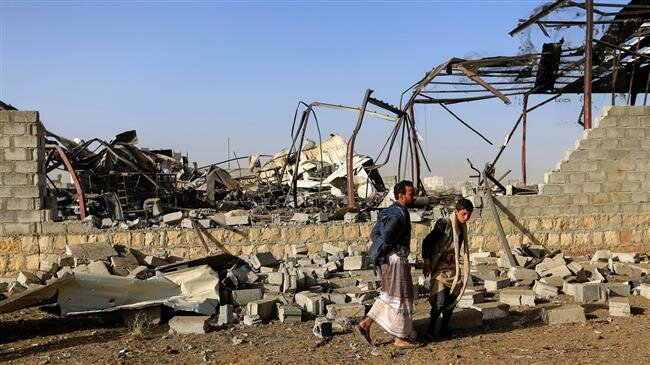 An international law group has submitted a new report to the British government providing evidence that the Saudi-led coalition has been covering up its unlawful airstrikes on civilian targets and its war crimes in the war on Yemen.

Researchers from the independent Yemeni rights group Mwatana, seen as impartial by the UN, have collected the evidence which was submitted to the international trade secretary, Liz Truss, by the Global Legal Action Network (GLAN) and UK law firm Bindmans.

It contains witness testimony as well as the crater and bomb-fragment analysis from scores of strikes carried out by the coalition and added that the Riyadh covered up evidence of war crimes in subsequent investigations into bloody attacks.

“The coalition has continued to carry out apparently unlawful attacks throughout the course of the conflict, failed to credibly investigate, and whitewashed significant civilian harm,” the two organizations said in a statement.

GLAN’s director Gearóid Ó Cuinn said, “The UK government can either rely on discredited Saudi assurances or listen to those who have documented painstakingly the constant civilian deaths caused by coalition airstrikes.”

The new report will put Britain under more pressure as the government is legally not allowed to license arms exports if there is a “clear risk” that they might be used to deliberately or recklessly kill civilians.

The UK Court of Appeal ruled in June that the country’s extensive arms deals with Saudi Arabia are unlawful because the weapons are being used in the kingdom’s deadly war against the people of Yemen.

It came after a damning parliamentary report, issued by British House of Lords International Relations Committee, said in February that UK arms sales to Saudi Arabia since the start of the Riyadh-led war on Yemen have been causing “significant civilian casualties” in the country.

The UK has licensed over £4.7 billion worth of arms exports, including missiles and fighter jets, to Riyadh since the beginning of the deadly conflict. Britain has also been providing combat intelligence and target data to Saudi Arabia over the course of the war, which has killed thousands of Yemeni civilians and put millions more on the verge of famine.

Saudi Arabia and a number of its regional allies launched a devastating military campaign against Yemen in March 2015. The US-based Armed Conflict Location and Event Data Project (ACLED), a nonprofit conflict-research organization, estimates that the Saudi-led war has claimed the lives of over 60,000 Yemenis since January 2016.

US-Saudi aggression has also taken a heavy toll on the country’s infrastructure, destroying hospitals, schools, and factories. The UN has already said that a record 22.2 million Yemenis are in dire need of food, including 8.4 million threatened by severe hunger. According to the world body, Yemen is suffering from the most severe famine in more than 100 years.