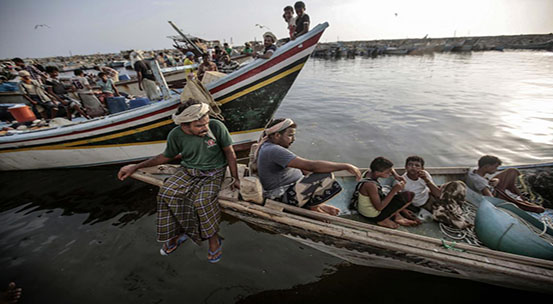 aggression on YemenAnalyses and Articles

US-Saudi aggression naval forces have carried out at least five deadly attacks on Yemeni fishing boats since 2018, Human Rights Watch said Wednesday. Aggression warships and helicopters have been involved in attacks that killed at least 47 Yemeni fishermen, including 7 children, and the detention of more than 100 others, some of whom were tortured in custody in Saudi Arabia.

The aggression attacks on fishermen and fishing boats appear to be deliberate attacks on civilians and civilian objects in violation of the laws of war. US-Saudi Aggression officials who ordered or carried out the attacks or tortured detainees are most likely responsible for war crimes, HRW said in a report.

The report indicated that Human Rights Watch interviewed survivors, witnesses, and knowledgeable sources about seven fishing boat attacks: six in 2018 and one in 2016. Civilians died in five of them. After they gathered there, aggression forces opened fire with light weapons, killing or wounding several men and boys.

Warships and helicopters were involved in the attacks from short distances away, so the civilian nature of the fishing boats should have been clear. it added. The fishermen waved white cloths, raised their hands, or otherwise showed they posed no threat. In three attacks, aggression forces did not attempt to rescue men adrift at sea, and many drowned.

A fisherman described the attack on his boat: “The helicopter was close, about three meters up. They said [over a megaphone] ‘go forward,’ and four or five [fishermen] went forward, and the rest were near the [boat’s] stern. I was in the middle. Then they hit us with the big gun with bullets.” Seven fishermen died.

The US-Saudi aggression also detained, without charge, at least 115 fishermen, including 3 children, in Saudi Arabia for between 40 days and more than two-and-a-half years, HRW said. Seven former detainees said that Saudi authorities tortured and ill-treated apprehended fishermen and boat crew members and denied them contact with their families, legal counsel, and Yemeni pro-aggression government representatives.

The attacks and detentions severely affected remote fishing communities that lost the primary earners for dozens of families. They have also deterred other fishermen from going to sea. “Before the war, fishing was good,” said the wife of a fisherman. “But we heard that eight men from the neighborhood next to us were killed … so [my husband] stopped going.”

The San Remo Manual on Armed Conflict at Sea, which is widely viewed as reflecting customary laws of war at sea, requires attacking forces to do everything feasible to limit attacks to military targets. Vessels are presumed to be civilian unless they are carrying military equipment or presenting an immediate threat to the attacking vessel. “Small coastal fishing vessels” are specifically exempt from attacks. These vessels must submit to identification and inspection when required, and follow orders, including orders to stop or move out of the way. The laws of war also place a duty on parties to the conflict, whenever circumstances permit but particularly after an engagement, to take all possible measures to search for and collect the wounded and shipwrecked.

The US-Saudi aggression has consistently failed to investigate alleged war crimes and other unlawful attacks, including the attacks on fishing boats, HRW said. No coalition personnel is known to have been disciplined or prosecuted for attacking Yemeni fishing boats.

Countries such as the United States, United Kingdom, and France should immediately cease all sales and transfers of weapons, including warships and helicopters, to Saudi Arabia, and should carefully review sales to coalition members given the possibility they could be used in committing violations, Human Rights Watch said.

“The naval attacks on Yemeni fishing boats make it clear that the Saudi-led coalition is not only killing civilians through countless illegal airstrikes but also while conducting operations at sea,” Motaparthy said. “How much more proof does countries continuing to sell weapons to Saudi Arabia need to stop all sales, including of warships, or risk becoming complicit in war crimes.”

Leading a coalition of its allies, Saudi Arabia invaded Yemen in March 2015 in an attempt to reinstall the former regime, which had been friendly to Riyadh, but whose officials fled the country.

The coalition has also imposed a naval blockade of Yemen. The aggression is estimated to have left 56,000 Yemenis dead.

US-Saudi aggression has also taken a heavy toll on the country’s infrastructure, destroying hospitals, schools, and factories. The UN has said that a record 22.2 million Yemenis are in dire need of food, including 8.4 million threatened by severe hunger. According to the world body, Yemen is suffering from the most severe famine in more than 100 years.