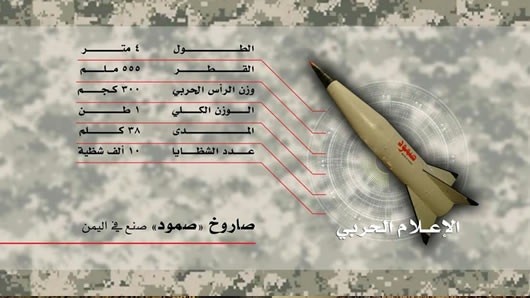 The missile force of the Yemeni army and popular committees launched a Sumod rocket, which is locally made, on a Saudi mercenary camp in Sawma district, Baitha’a governorate, central Yemen.

Sumod is a locally made rocket and is a surface-to-ground missile, tactical, short-term ranges up to 38 kilometers, is equipped with a simple and a mobile base that can be carried on a vehicle.

Its length reaches 4 meters and it has a diameter of 55.5 cm full weighing up to a ton, and it carries a warhead weighing 300 kg. Sumod also possesses a feature of exploding into ten thousand fragments which increases the impact and effectiveness of its targeting.