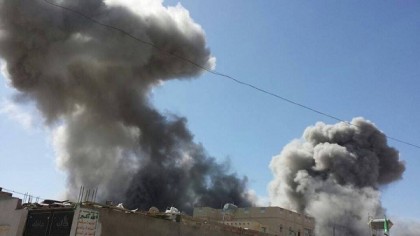 Yemeni Civilian Killed by a Saudi American Raid in Saada

A Yemeni farmer has been killed today by a raid launched by the US-backed Saudi coalition in Al Shamia region, Baqm district, Saada governorate. The raid also resulted in the damaging of the civilian’s farm.

Fighter jets of the US-backed Saudi coalition targeted one of the farms in Al Shamia region, Baqm district, leading to the death of the owner whom was present in the farm during the bombardment. Farm was also severely damaged.

Many frontier villages in Baqm district have been subjected to Saudi missiles causing damage to private and public properties.

Moreover, the coalition has been aiming at the border villages of Saada which joins the list of the targeted Yemeni governorates, where several massacres and war crimes have been committed.