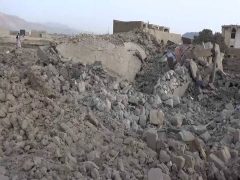 Saudi warplanes launched a series of air raids, including sound bombs, on the districts of Sahar, Saqain and Manbah, security source confirmed.