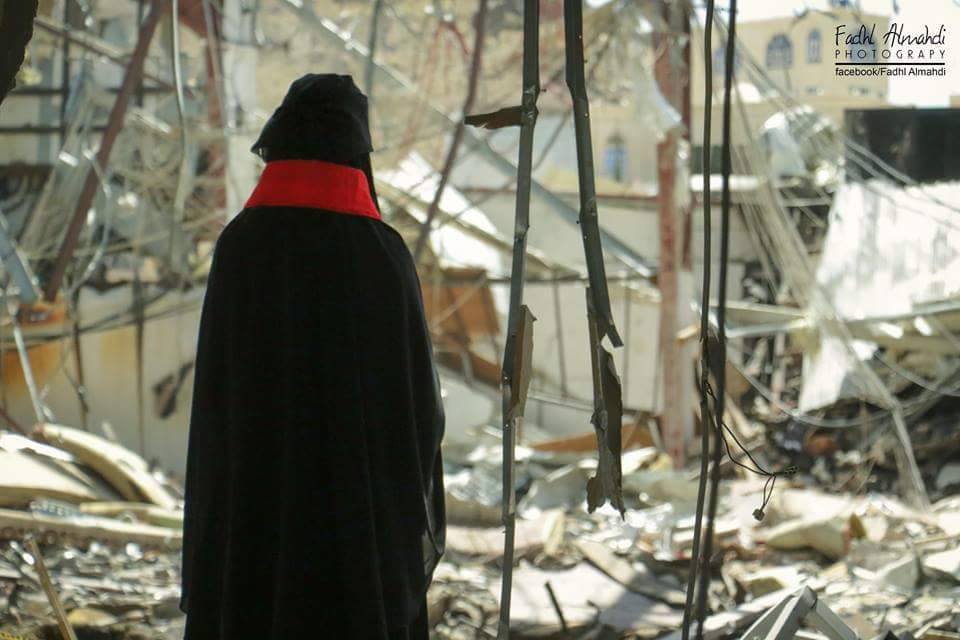 Reading the title, one might think this article is about funeral fashion, but it is not. This is literally about what to wear if you are about to die, it is a story about Yemeni women. It is a story of dignity and impressiveness.

Life in Yemen has been everything but normal. Since the inception of the brutal and vicious Saudi aggression against Yemen, Yemenis have been experiencing extreme changes in their lives. The aggression barbarically murders innocent civilians using indiscriminately weapons and shamelessly violates the laws of war.

Walking down the streets of Yemen, one can hear grieving mothers weeping over the bodies of their beloved ones and children wailing their parent’s death. Images of martyred are filling the streets along with dynamic images of the survivals suffering through the hardship of gaining the necessary food, water, and medicine. It does not take one too long to realize that thousands and thousands were killed, more have been displaced and millions are in desperate need of help.

War jets have no mercy, even when they are not savagely murdering innocents; their constant terrifying sound traumatizes children, women and the elderly. Safety is nowhere to be found. Shelters were targeted, grocery markets were wiped off and even funeral venues were bombarded. Life is becoming unbearable, and the hardship can easily break the strongest of men.

If history was any indication, it has been known that when people get scared, the first thing they will give up is their humanity and values. That is at least what I expected. I thought Yemenis will become selfish. I thought social ties will break for money and influence, people will fight each other for bread and water, achaos will spread everywhere and the enemy will triumph. That’s when the surprise came running through the door. Yemenis in the harshest circumstances did what no one expected. Every household starts hanging food on their doorsteps for the needy even if it was very little. They started hosting displaced families, giving them refuge and necessary commodities. All was partaking with happiness and conviction re-emphasizing that their humanity is not dead, even when the humanity of the rest of the world has been watching in silence.

The crucial role in keeping the Yemeni society together is mostly done by the women. While the men are honoring their country by giving their lives in the battle field, the women are making sure that those who are alive do not lose their humanity. Not only they are drawing smiles on the faces of their children and instilling confidence in their men, but they are the silver-lining that no matter what happens today, tomorrow will be better even if they have been deprived of almost everything including privacy. In a conservative Yemeni society, women have to cover-up their bodies when they are in public, but they can wear what they please in the privacy of their homes. Now under the aggression, they have also been dispossessed of that right too. When the airstrikes intensified their attacks and bombarded civilian areas at night, victims have to be rescued from under the wreckage. Some women bodies were retrieved while wearing their night gowns and pajamas. Those corpses made the society and especially women to feel exposed and undignified. That was when women decided to start their movement of getting dressed for their death that can happen at any moment under the hostility of the blood-thirsty enemy. They had to go through the thought of how will they look if their corpses are to be shown in public. Some began to wear their Abayas and some began to look for what can cover up their bodies, without being exposed in case they were to be dead, and at the same time still look elegant and attractive for their loved ones. Shops started altering their designs and women began altering dresses they already have. Some started designing and some started to recommend what is good in the market. That is when getting dressed for death became normal in Yemen and that’s what Yemeni women have to wear till the war is put to sleep.

I know that might sound preposterous and sad for many people, but for me, I believe those women created the most profound and selfless act of all. Getting dressed was not only about covering up but it was a symbol of bravery and dignity. Those women despite the misery, managed to send a message that was more powerful than the enemy with all its jets and weapons. Their message reassured the society and humanity in general that even in the worst of conditions, we can still live, we can still draw happiness in the faces of our children and beloved ones. In an era where it’s easy to have principles but hard to live up to them, Yemeni women proved that they are willing to die for their principles and shall they die, they will die dignified. They will die proud of their values, cherishing their principles, and loving their country. They shall die heroes as they triumphed over the enemy who hoped to expose them and steal away their humanity.