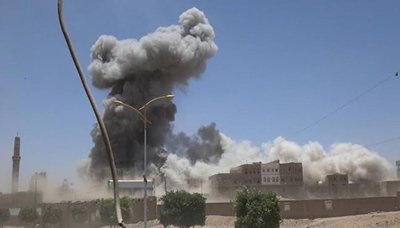 Fighter jets of the US-backed Saudi coalition waged 40 air raids today morning on several regions in the governorate of Saada.

Another 8 raids struck Al Jumaima village and its surroundings in Maran region, aiming at civilian houses and properties with no reported casualties, source confirmed.

The region of Al Soh in Kataf district has also been under bombardment by the coalition’s fighter jets, where 2 raids targeted the region.