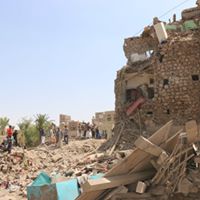 Warplanes of the US-Saudi aggression launched on Tuesday morning raid on a citizens’ house in Dhahian city of directorate of Saada .

A military source said, the warplanes of the Saudi American aggression targeted home of citizens and resulted martyrs , two wounded and the destruction of two houses in Dhahian directorate in Saada province.

Aggression targeting citizens and 3.1 million internally displaced of Yemen who have lost everything in the name of restoring a government.