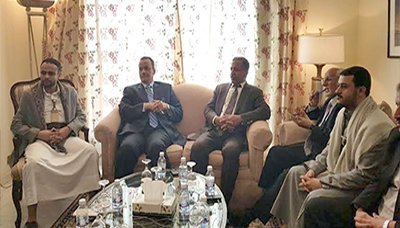 The national delegation reiterated its position adhering to comprehensive suspension of the US-Saudi aggression on Yemen.

The national delegation also reiterated to lift the unjust blockade on the country at the forefront on Sana’a International Airport to allow citizens’ transportation as well as to transfer the injured people due to the US-Saudi aggression for treatment.

The national delegation pointed out to the extreme suffering encountered by the Yemenis suffering illnesses and the wounded who are stranded at some airports because of the continued blockade and the closure of airspace in front of flights.

He pointed out that the UN envoy’s visit to Yemen coincided with the continuation of the military escalation by the US-Saudi aggression and its mercenaries through military intensive advances and hysterical aerial bombardment, as well as military operations across various provinces which led the death and injury of many civilians, including children and women every day. Such crimes are committed amid an international silence by the international community at the forefront the United Nations and the Security Council, whom have prejudiced their legal, moral and humanitarian responsibilities towards the Yemeni people suffering war crimes and genocides without moving the conscience of the world that only talks about human rights, freedom and democracy.

The national delegation noted the increasing reports of international organizations, including the UN about the catastrophic humanitarian situation caused by the continued aggression and siege, particularly in the food and health sector.

He stressed that the insistence of aggression and its mercenaries to try and move the central bank to Aden province has increased the deterioration of the economic situation and caused the non-payment of salaries of state employees for four months. As a result, it caused the unprecedented suffering of numerous Yemeni people. The national delegation confirms that the United Nations must hold its responsibility for remaining silent, calling the Secretary-General of the United Nations to take action in order to lift the imposed siege on the Yemeni people.

The national delegation highly, positively and responsibly stressed all efforts in this regard and the latest of which was a .positive side made by the UN initiative that put it on ground for discussion, taking clarification and explanation for notes On the other hand, the countries of aggression displayed intransigence towards these efforts, as well as their refusal to deal with international and UN initiatives that would alleviate the suffering of the Yemeni people, both on the human, economic and health level.

The national delegation clarified that the other party and the aggression countries made escalated and made the standard of living complex, as well as the economic and humanitarian situation in Yemen.

The other party and the aggression countries prevented commercial traffic and has been looting the income and wealth of the country’s oil and gas for the benefit of more mercenaries at the expense of millions of beleaguered and oppressed Yemeni people.

Workshop on Development of Food Security in Hodeida Begins