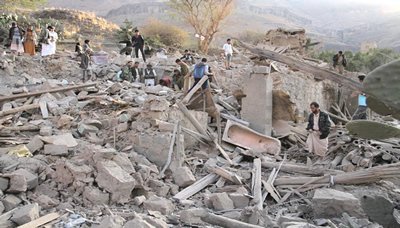 US-Saudi Aggression Kills a Civilian, His Daughter in Bani Matar

A man and his daughter have been killed on Wednesday in two Saudi American air raids on Bani Matar district in Sana’a governorate.

A local official said to Yamanyoon that the Saudi aggression warplanes targeted the house of Mohamed Al-Hakami in Sana’a area, killing Al-Hakami, the husband, as well as his daughter

The official said that his wife is now suffering injuries.