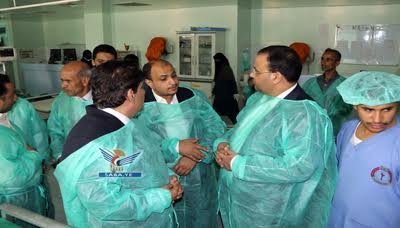 President of the Supreme Political Council visited on Tuesday the Central Military Hospital of the Armed Forces in the capital Sana’a.

The President got acquainted with services and medical care provided by the hospital for the wounded who have been injured by the bombardment of the US-Saudi brutal aggression on civilians, communities, housing, markets and service facilities.

President also inspected a number of military heroes of the Yemeni army and Popular forces, expressing his gratitude for their vivid national value in defending Yemen against the aggression and its mercenaries.