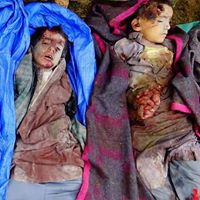 Two children were killed by gunmen riding a motorcycle in Sina neighborhood of Al-Muzaffar district of Taiz.

At the same context , a child was killed and five others injured by a raid of the Saudi aggression warplanes , where it targeted citizen’s house in Jawf province .

Report of the military operations of the battlefronts in Taiz , Marib and Jawf