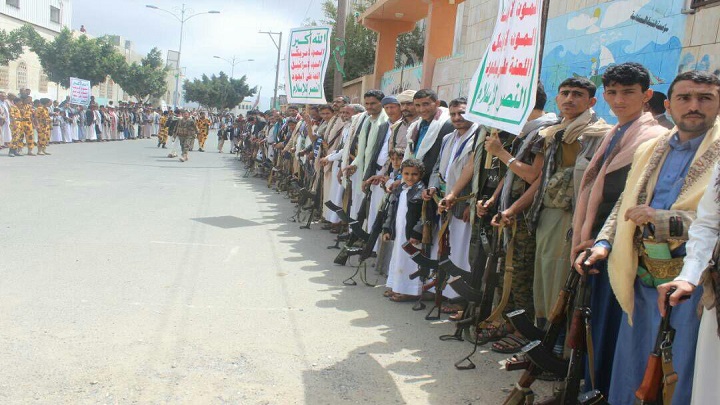 On Friday, the city of Hajjah witnessed a protest condemning the economic siege and the suffering of the Yemeni people.

The participants condemned the crimes committed by the American-Saudi aggression against Yemeni women, children and civilians in general, in addition to imposing a siege on Yemen, resulting in the collapse of Yemen’s economy; thus, putting the responsibility upon the United Nations and the countries of coalition for such acts, violations and crimes, where Yemenis assure that they will pay the price.

The statement also held the United Nations and the countries participating in the war on Yemen accountable for the worsening humanitarian and malnutrition crisis among children in Yemen, specifically in the province of Hajjah, where hundreds of children have faced death because of the siege imposed by the Saudi aggression on Yemen.

The statement called for continuing to back the fronts with men and money in order to achieve victory and liberate every inch of the Yemeni land, praising the free voices of the world, that rejected the Saudi-UAE occupation in the south of Yemen within the province of al-Mahrah. The statement assured that it stands with the independent people of the world, who oppose and go against the Saudi military campaign in Yemen.

The statement praised the legendary victories achieved by the people of the army and the popular committees on various fronts, where they have taught the Saudi coalition and its mercenaries lessons they will not forget. In addition, they praised the achievements of the missile force and air force that have inflicted heavy losses on equipment and men of the enemy.

Latest Records of Saudi Crimes and Violations in Yemen (Sep.28.2018)