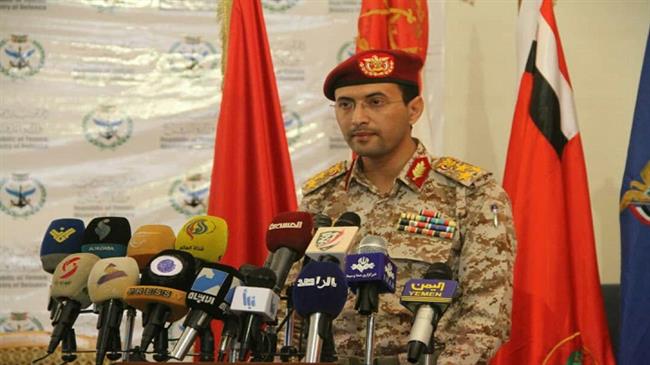 Hostilities by the Saudi-Led Coalition Continue in Yemen: Military Official

The spokesman of Yemen’s army said on Monday that the Saudi-led coalition did not halt its offensive operations in all fronts nor did it stop committing a number of crimes and brutal attacks during the past 10 days; in addition, it did not respond to calls for a ceasefire.

Brigadier General Yahya Saree said during a press conference held today: “The coalition launched during the past 10 days 350 raids focused mostly on the provinces of Saada and Hodeidah, resulting in the death and wounding of a number of civilians in addition to the destruction of a number of houses, especially in the province of Hodeidah, where the bombing focused on the eastern and southern neighborhoods of the city of Hodeidah and on Durayhmi and Kilo-16 while targeting vital areas in the province, causing significant damage to the factories and warehouses.

During the conference, the spokesman revealed the number of operations taken in response to the escalation of the coalition, saying that the army in support with the committees foiled more than 50 offensive attempts in all fronts during the past 10 days, emphasizing that most of the offensive attempts made by the coalition were mainly focused on the bordering regions, where the coalition targeted the Baqem district that shares the border with the Saudi southern province of Asir, as well as Razih that borders Jizan Saudi governorate, resulting in the killing and injuring hundreds in coalition ranks.

He explained that the coalition attempts to advance on the ground have failed and that the combat position on all fronts in favor of our forces, stressing that the army forces and the Popular Committees control the strategic heights in Jizan and sites of military importance in Asir and Najran southern provinces.

Brigadier general Saree noted that the Saudi-led aggression is using internationally banned arms and cluster bombs in killing and injuring thousands of innocents in Yemen, where it has killed 1,124 people and wounded 1,665 others.

” Most of the victims are children, and a vast amount of the cluster bombs are American made,” the senior Yemeni military official said.

A recent report said that investigators have found out that Saudi-UAE weapons, most of which were sold by the US and the UK, are being diverted to militias in Yemen, some are linked to ISIS and al-Qaida.

Some of the arms diverted to the militias in Yemen include sophisticated armored vehicles, rocket launchers, grenades and rifles, which abuses trade agreements between  Saudi Arabia, UAE and the European and US companies.

In 2016 UN Security Council issued a warning over “lax accountability” on the part of the coalition and expressed concern that weapons may be diverted to the black market.

The special envoy to Yemen Martin Griffith had arrived at the capital of Yemen Sana’a so he can travel with Sana’a delegation as early as Tuesday to Sweden for Yemen peace talks.

Yemen is the world’s largest humanitarian crisis with more than 22 million people in need and is seeing a spike in needs, fueled by ongoing conflict, a collapsing economy, and diminished social services and livelihoods. The blockade on Yemen has smothered humanitarian deliveries of food and medicine to the import-dependent state.

The UN has repeatedly criticized the Saudi-UAE-led military coalition’s bombing campaign and placed it on a blacklist of child rights violators last year.

A UN panel has also compiled a detailed report of civilian casualties caused by the Saudi military and its allies during their war against Yemen, saying the Riyadh-led coalition has used precision-guided munitions in its raids on civilian targets.