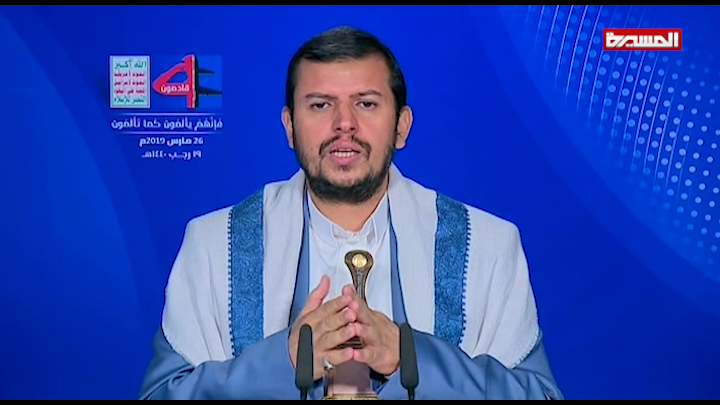 The leader of the revolution, Sayyed Abdul-Malik Badr al-Din al-Houthi sent a warning during his televised speech to the Saudi-led coalition from any escalation in the city of Hodeidah, vowing a response will be taken to the depth of the countries of the coalition, Saudi Arabia and the UAE if this happens.

“The results will not only remain in the province of Hodeidah but will extend to the depth of those countries that supervise and sponsor this “aggression” and carry out this “aggression,” Sayyed Abdulmalik said in a televised speech that took place on the eve of the fourth anniversary of the beginning of the Saudi war in Yemen.

He pointed out that the agreement that was signed regarding Hodeidah was within the humanitarian context and wasn’t within the political file, wondering: Why do they want to politicize? Reaffirming the commitment to implement the agreement of Sweden based on what was agreed upon and not what the coalition and it forces want.

Sayyed Houhi said that the United Nations neglected the siege imposed by the Saudi coalition to the city of the Durayhmi in Hodeidah and just kept watching this siege without taking any actions.

The leader of the Yemeni Ansar Allah movement called on the Yemeni people to be vigilant and cautious against any escalation by the coalition and its paid militias in Hodeidah.

The Yemeni leader pointed out that the Hodeidah agreement was clear in all its clauses and substance. It is based on the receipt of the official local authorities for the agreed areas. It stipulated that the United Nations should have a supervisory role over the ports of Hodeidah, which is under the control of officials from Sana’a.

He then affirmed that the agreement of Sweden was not built on that there is an administrative and security role in Hodeidah to a party other than the government agencies, but added that “the enemies seek to make the conventions a way to occupy the country, and if they fail in this matter, they derail the agreement in full.”

The US, Israeli support to the coalition led by Saudi Arabia

He said that the brutality and crimes of the Saudi coalition against the Yemeni people and evasion of the conventions reveal the reality of the coalition whose real objectives, according to Sayyed Houthi, is to occupy and take full control of Yemen.

On the other hand, Sayyed Abdulmalik said that confronting the aggression was a religious duty just as prayer, fasting and Hajj. He pointed out that the US-backed Saudi coalition has violated and crossed all the red lines and broke all customs and laws during “their” war against people of Yemen.

“If the nationalists do not act in this circumstance in which our country is subjected to occupation and killing, when will they act?” He wondered.

He then asked: Is there legitimacy to the occupation of Socotra island and al-Mahrah and other areas where there was not even the army and the popular committees?

Mr. Abdul-Malik Badr al-Din al-Houthi stressed that it is illogical that our people are in a false situation, and that America, Israel, Saudi Arabia and “traitors” are in the right position.

He pointed out that the forces of the coalition did not acquire legitimacy from the beginning and will not acquire it in the end, saying, “No one may be one of the tools provided by the occupiers to justify this aggressive war.”

He added that steadfastness is the most important lesson from the outcome of the past four years, pointing out that this steadfastness caused heavy losses in the forces and militias affiliated with the coalition and its military equipment and economy.

“We are coming in the fifth year,” he spoke specifically to the Yemeni people. “We must be careful to strengthen all the factors of steadfastness. This is what will benefit, which will make any agreements to succeed and any negotiations to reach results.”

The Golan is part of Syria

In the international affairs, Sayyed Abdul Malik said that America is a danger to the rights of peoples and cannot be in the right position, wondering “America is seeking to confiscate the sanctities of the nation in Palestine and the loss of the Palestinians’ right to return, so how it can be a sponsor of rights?”

He stressed that the Golan is clearly part of Syria, and Trump comes to donate it to the “Zionists” like it’s an inheritance from his father.

Purge institutions from the corrupt

In addition, he stressed that the upcoming programs will aim to purge corrupt institutions to carry out their duties towards the people of the country and that the national vision will be built on the basis of the identity of our people of faith and benefit from modern technologies.

The Development of military capabilities

On the military side, he said that the Yemeni people currently possess important techniques at the level of military manufacturing that are not owned by Saudi Arabia and the UAE.

“Our enemies will regret because they will realize that our country has become a producer of military capabilities to fill an important place in the military industry,” he said, stressing that the fifth year is the year of military development.

“We insist on being a free and independent people and this is our legal right, and whoever wants to deprive us of our right to freedom and independence will lose their soul,” Sayyed Houthi emphasized.

Moreover, he promised that the fifth year will be a year marked by more victories and the protection of the country.

Finally, Sayyed Houthi concluded by stressing that the fortification of the home front is through the immunization of the mind, the activation of the tribal document and the protection from the media penetration.